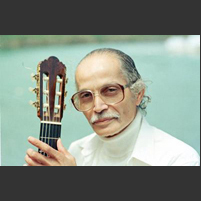 Baden Powell is a Brazilian musician with a solid international reputation. A gifted instrumentalist and composer, bridging the gap between classical artistry and popular warmth, he was a key figure in the bossa nova movement.
Born at the Varre e Sai district, he was baptized after his grandfather, a musician and conductor himself, whose father was an admirer of the Boy Scouts founder. When he was four months old, his family moved to the hill of SÃ£o CristÃ³vÃ£o, in the city of Rio. His father, the violonista Lino de Aquino, promoted regular get-togethers (rodas) of chorÃµes at his home, in which famous names of Rio's music used to play, such as Pixinguinha, his brother China, the sambista Donga and so many others. At eight, his father took him to the RÃ¡dio Nacional, where Baden met Meira (Jaime Florence), a famous violonista, at the time a member of Benedito Lacerda's regional.

Baden would study violÃ£o with him for five years. Through Meira, a broad-minded musician, he discovered classics such as Segovia and Tarrega, along with Brazilian masters such as Garoto and Dilermando Reis. At nine he presented himself at Renato Murce's show Papel Carbono, at the RÃ¡dio Nacional, winning the first place as guitar soloist. At 13, he used to run from school, earning his first cachets in the neighborhood parties. After finishing high-school, he joined the cast of RÃ¡dio Nacional as accompanist. In that time, he traveled through Brazil with the radio's singers.

In 1955, he joined Ed Lincoln's trio, playing jazz at the Plaza nightclub. The place was a focal point for musicians, journalists and aficionados interested in jazz. It should be regarded as the second place where bossa nova was being generated (the first being Cantina do CÃ©sar, after Johnny Alf's first appearances), contrarily to the common notion of the bossa being born at Zona Sul (South side)'s apartments. At that time, Baden began to compose: "Deve Ser Amor", "Encontro Com a Saudade", "NÃ£o Ã© Bem Assim", and his first big hit, 1956's "Samba Triste", with lyrics by Billy Blanco, which would be recorded by LÃºcio Alves in 1960. In 1962, he met his future partner VinÃ­cius de Moraes, composer, poet, singer and diplomat.

Their first song was "CanÃ§Ã£o de Ninar Meu Bem", a great success from the beginning. Following, they'd come up with "Samba em prelÃºdio" (recorded still in 1962 by Geraldo VandrÃ©/Ana LÃºcia), "ConsolaÃ§Ã£o" (recorded by Nara LeÃ£o), "Samba da bÃªnÃ§Ã£o", "Tem dÃ³", "SÃ³ por amor", "Bom dia, amigo", "Labareda" and "Samba do astronauta" (recorded by Baden in 1964). At this point, Baden was already a renowned musician and composer, with good connections with the artistic scenery and wide exposure at the media. In that year, he accompanied SÃ­lvia Telles in her famous show at the Jirau nightclub. In 1963, he recorded his first Lp, Um violÃ£o na madrugada (Philips). In that year he traveled to Paris, where he presented himself at the Olympia theater, with great success, with a repertoire of classical music and his own compositions.

He also played regularly in a season at the Bilboquet nightclub and composed the soundtrack of the movie Le Grabuje. In 1964 he returned to Brazil, recording the Lp Ã vontade, which included a composition by Tom Jobim and VinÃ­cius, "Samba do aviÃ£o". He also wrote, in that year, the samba "Berimbau", with lyrics by VinÃ­cius. Other duo's compositions in that year were "AlÃ©m do amor", "Valsa sem nome", "Deve ser amor", "CanÃ§Ã£o do amor ausente", "ConsolaÃ§Ã£o", "Deixa", "Amei tanto", "Tempo feliz" and "Samba da BÃªnÃ§Ã£o". The latter was included in Claude Lelouch's movie Un Homme et Une Femme, under the title "Samba Saravah".

Traveling to Bahia, Baden stayed there for six months, researching the afro traditions developed in Brazilian soil, especially the musical tradition emanated from the ancient sorcery rituals of candomblÃ© and umbanda. The next phase of his compositional association with VinÃ­cius would be called by Baden as the afro-sambas, mirroring the findings of that period: 1965's "Tristeza e solidÃ£o" and "BocochÃ©", 1966's "Canto do XangÃ´" and "Canto de Ossanha", this latter recorded by Elis Regina in 1966 with great success. Taking Bahia folklore, Baden added his Carioca touch, bringing the afro tradition to a more Brazilian feeling. In 1999, Baden, recently converted, regretted and deplored the afro-samba phase as "devil's music" in a controverted and disappointing interview.

In 1965, fundamental singer Elizeth Cardoso presented Baden/VinÃ­cius's "Valsa do amor que nÃ£o vem" at the first Festival of Brazilian Popular Music, from TV Excelsior, SÃ£o Paulo, classifying it in the second place. Next year, AluÃ­sio de Oliveira produced another album by Baden, this time for his own landmark label Elenco, deeply engaged in the registration of the best musicians, leaving the commercial side in the background - unfortunately causing the excellent label's demise, some years later.

Taking advantage of the Brazilian tour of Caterina Valente, who was being accompanied by the drummer Jimmy Pratt, AluÃ­sio took him and recorded Baden Powell swings with Jimmy Pratt. Also in that year, TV Excelsior promoted the National Festival of Popular Music, in which the novice Milton Nascimento got the fourth place with "Cidade vazia" (Baden/Lula Freire), and Baden with VinÃ­cius recorded their afro-sambas "Canto de XangÃ´", "Canto de IemanjÃ¡" and "Canto de Ossanha" for label Forma, along with "Berimbau" and "Samba da BÃªnÃ§Ã£o". He also took a season with Elis Regina at Rio's nightclub Zum-Zum. The Lp's O mundo musical de Baden Powell (Barclay/RGE), recorded in France, Baden Powell ao vivo no teatro Santa Rosa (Elenco), Tempo feliz (Forma/Philips) where all recorded in 1966.

In that period he played in the USA with Stan Getz. In 1967 he recorded in Paris, France the album O mundo musical no. 2, accompanied by the Paris Symphonic Orchestra. In that year his O mundo musical de Baden Powell was awarded with the Golden Record, in Paris, and he presented himself at the Jazz Festival of Berlin, Germany, together with the American jazz guitarists Jim Hall and Barney Kessel. In 1968, a novice Paulo CÃ©sar Pinheiro (today, a renowned samba composer) composed with Baden the samba "Lapinha", which was presented by Elis Regina at the TV Record's First Samba Biennial, winning the first place.

For Elenco, recorded the Lp Estudos. In 1972, recorded for Philips the Lp Ã de lei. Solitude on guitar was recorded next year in Germany. In 1974, recorded live in Paris the Lp aden Powell (Barklay/RGE), and in 1975 recorded the Lp Baden Powell Trio & Ãpera de Frankfurt. He then moved to Baden-Baden (Germany), staying there for four years. In 1994, already living in Brazil again, released the record Baden Powell de Rio Ã  Paris. In that same year, he performed together with his sons Louis Marcel (violÃ£o) and Phillipe (piano) at the CecÃ­lia Meireles Hall, in Rio, having the concert being recorded and released in a Cd titled Baden Powell & Filhos through CID.

In 1995 his concert at the Montreux festival was recorded in Cd under the title Baden Powell live in Montreux. Also in that year he was awarded with the PrÃªmio Shell, for his complete works. In 1996 he toured in France with Brazilian accordionist Sivuca and recorded the Cd Baden Powell live at the Rio Jazz Club. -- Alvaro Neder

NY TIMES
Baden Powell, Guitarist Who Pioneered Bossa Nova, Dies at 63
By SIMON ROMERO
Roberto Baden Powell de Aquino, the musician whose blend of African,
jazz and classical influences gained him renown as one of Brazil's
greatest guitarists, died yesterday in Rio de Janeiro. He was 63.

The cause was pneumonia and multiple organ failure, said Alexandre
Raine, his publicist. Known professionally simply as Baden Powell, Mr.
Powell had been hospitalized for the last month at the ClÃ­nica Sorocaba in
Rio de Janeiro.

Named after Robert Steven Smyth Baden-Powell, the 19th-century British
founder of the Boy Scouts, Mr. Powell was born on Aug. 6, 1937, in
Varre-e-Sai, a small town in the interior of the state of Rio de Janeiro.

His grandfather, the abolitionist Vicente Thomas de Aquino, formed an
orchestra of black slave musicians before Brazil's abolition of slavery in
1888, and his father, Lilo de Aquino, supplemented his modest income as a
shoemaker by playing the tuba and the violin at local dances.

When Mr. Powell was a small boy his family moved to Rio, then Brazil's
capital, where his father enrolled him in private classes with Jaime
Florence, a guitar professor who introduced him to the work of Spanish
masters like Francisco TÃ¡rrega and Andres Segovia.

Mr. Powell proved to be a prodigious student, and by the time he was a
teenager, he was playing the guitar on national radio programs and at
dances and parties in the lower-middle-class suburbs of Rio. He went on to
play at at the Bar Plaza in the late 1950's in Copacabana, where he was
noticed by the composer Antonio Carlos Jobim.

Through Jobim, Mr. Powell met the composer Marcus VinÃ­cius de Melo
Moraes and soon became immersed in bossa nova, the stylistic reworking
of traditional Brazilian samba rhythms in the late 1950's and early 60's. In
perhaps the most fruitful part of his career, Mr. Powell collaborated with
Moraes on nearly 50 songs in the 1960's, like "Berimbau," released in 1967.

In "Berimbau," for which Mr. Powell composed the music and Moraes the
lyrics, the sound of the musical bow used in the ritual of capoeira, the
martial art brought to Brazil by slaves from what is now Angola, is subtly
recreated on the guitar.

"Baden Powell is to the guitar what JoÃ£o Gilberto is to style and Tom
Jobim is to composition," said Charles Perrone, a professor of Brazilian
culture at the University of Florida.

Shy and wiry, Mr. Powell went to live abroad in the late 1960's along with
many other prominent Brazilian musicians after a military coup toppled the
civilian government in 1964. He established himself in Paris, where he
worked with musicians like Thelonious Monk and Stan Getz, who helped
introduce him to audiences in the United States.

Mr. Powell moved to the German city of Baden-Baden in 1983, which he
used as a base for playing at jazz clubs and festivals in Europe, Japan and
the United States, according to Mr. Powell's biographer, the French writer
Dominique Dreyfus.

Still, Mr. Powell saved enough money to return to Brazil in 1988. In Rio de
Janeiro he began to play at clubs again. By then, however, he was perhaps
better known abroad than in Brazil, where popular music had undergone
enormous innovation because of musicians like Caetano Veloso and
Gilberto Gil.

"Although his career spanned continents and decades, in the popular
imagination Baden Powell belongs to that very special time for Brazilian
music in the 1960's, when things were still somewhat innocent," said
Christopher Dunn, a professor of Brazilian literary and cultural studies at
Tulane University.

In 1997 Mr. Powell became an evangelical Christian in a religious
conversion that led him to tone down his public performances of Afro-
sambas like "Samba da BenÃ§Ã£o," the song he composed that became well
known in the 1966 film "A Man and a Woman," by the French director
Claude Lelouch. He also became more reflective about Brazil.

"I get sad because our country has such beautiful places but it's all falling
down," Mr. Powell wrote in a Brazilian newspaper earlier this year. "We
must, I think, give greater importance to our natural wonders." 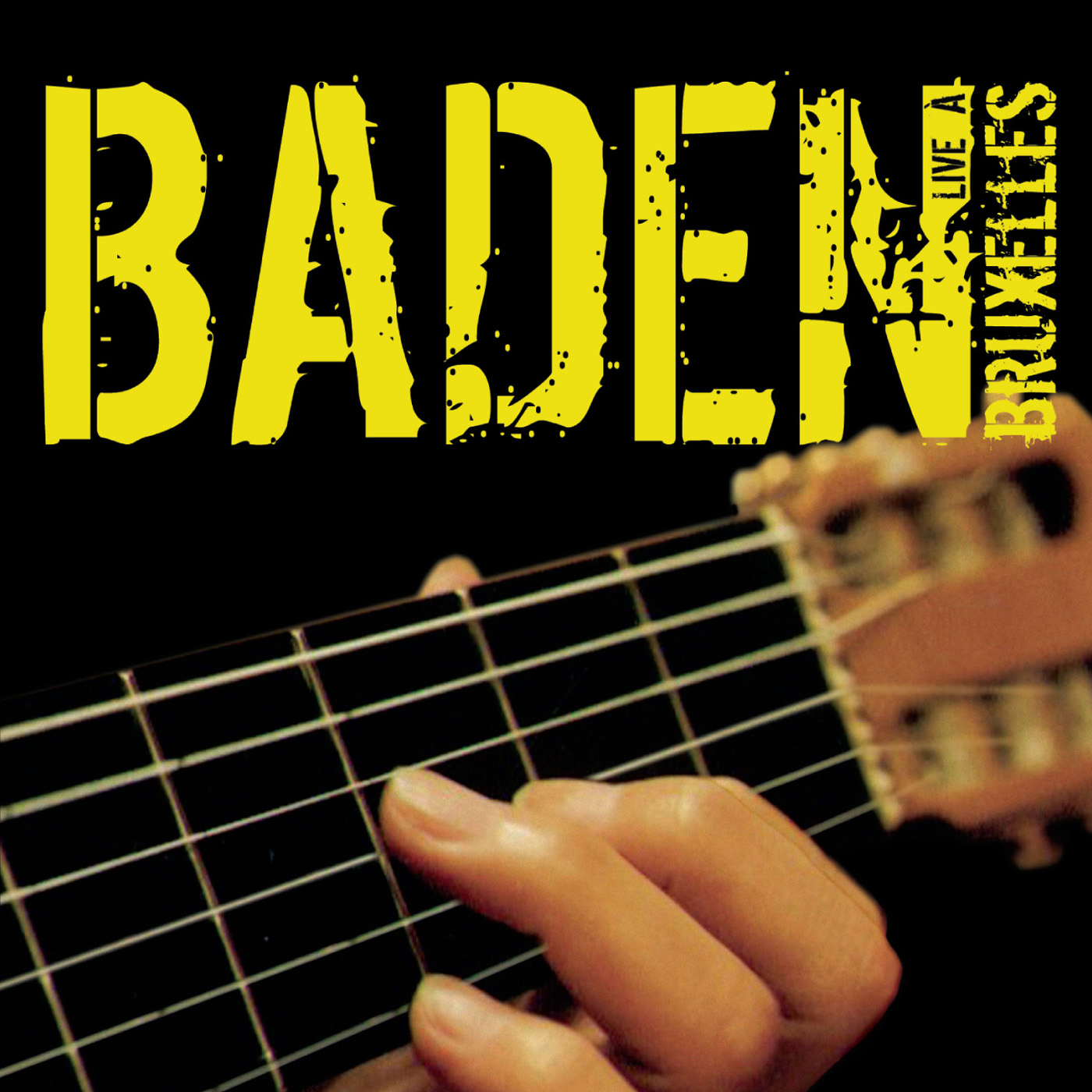 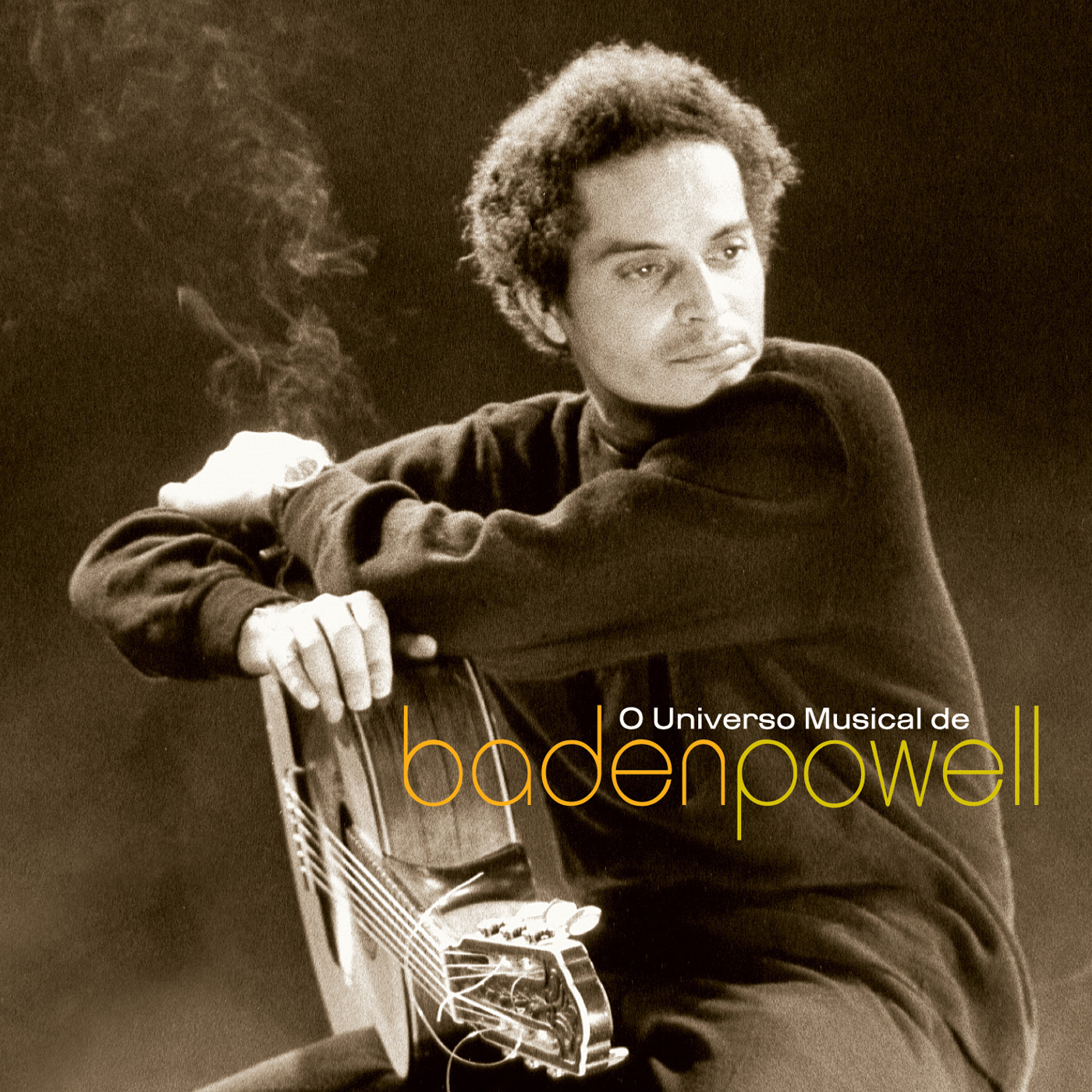 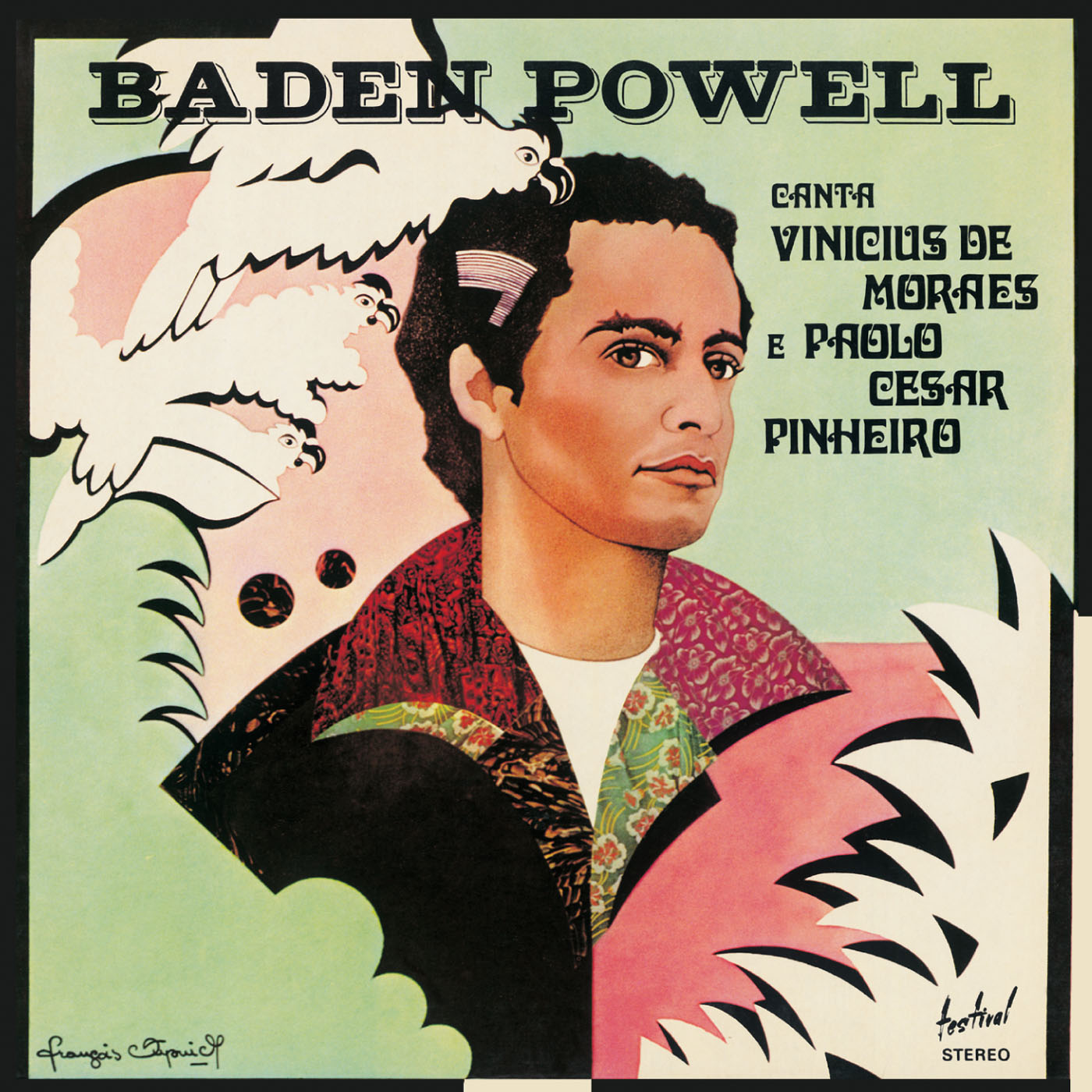 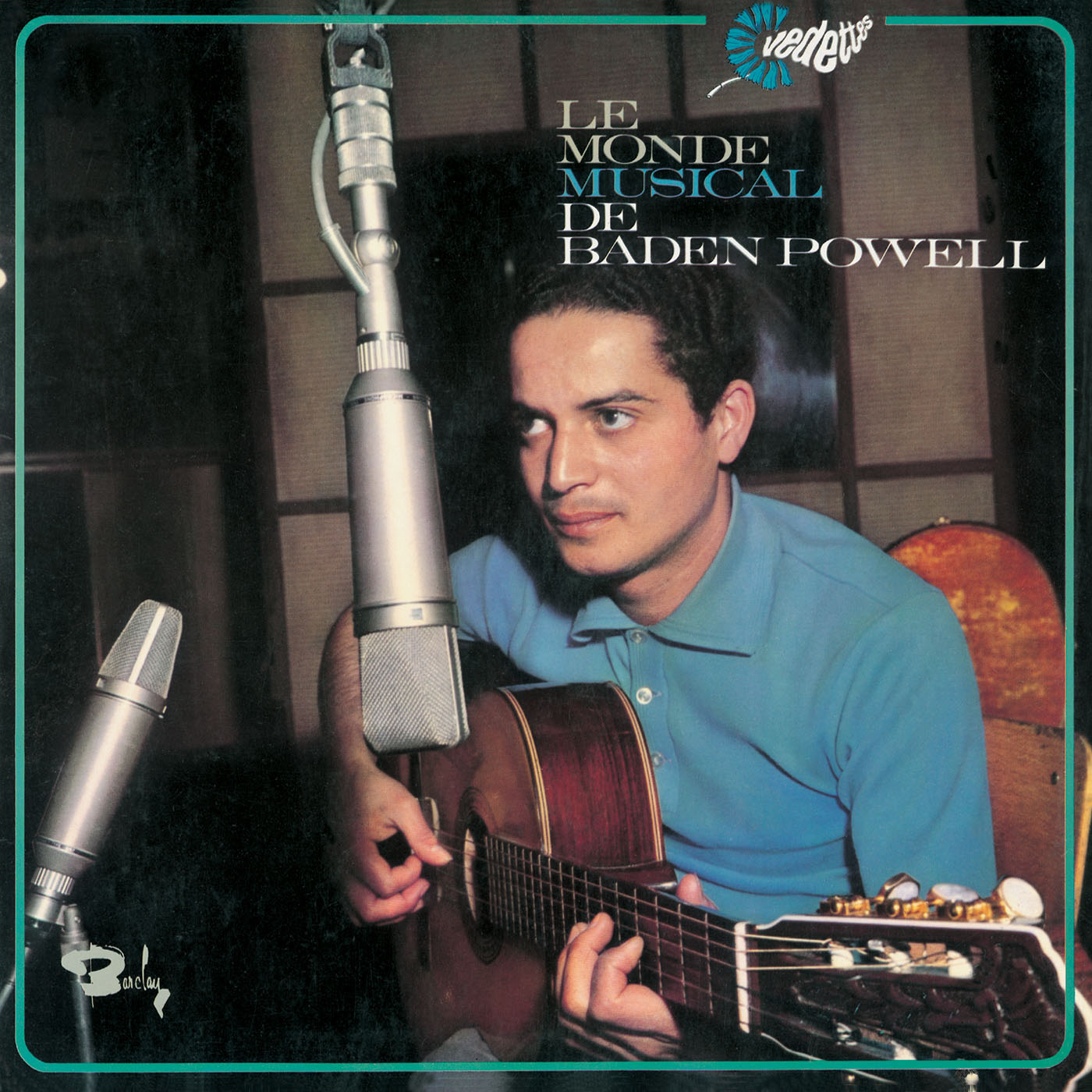