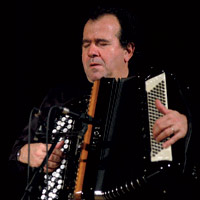 Richard Galliano changed the history of the accordion: today we can speak of speak of "before" and "after" Galliano."
(Yasuhiro Kobayashi - Japanese accordionist, BjÃ¶rk's accompanist).

He was born in Cannes on December 12, 1950. He studied piano and accordion with his father, Lucien Galliano, before pursuing his musical studies at the Nice Conservatory, presided at that time by organist Pierre Cochereau. He studied counterpoint, harmony, and trombone, graduating with a 1er Prix d' Excellence in 1969. In parallel with this musical apprenticeship he took part in international accordion competitions. Playing J.S. Bach, Tchaikovsky, Ravel and Gershwin, he won first prize in the accordion "World Cup" two years in a row (1966, Valence, Spain and 1967, Calais, France) as well as the President's Prize in 1968 (under President Charles de Gaulle).


In 1973 he left the south of France for Paris. For several years he collaborated with Claude Nougaro, Barbara, Serge Reggiani, Charles Aznavour, Juliette GrÃ©co, Georges Moustaki and Zizi Jeanmaire. His duo performance with singer Allain Leprest for the album Voce A Mano won him the Grand Prix du Disque from the AcadÃ©mie Charles Cros. In the realm of French chanson we should also mention his musical encounters with the singer Catherine Ringer (of the group Rita Mitsouko) at the CitÃ© de la Musique (Paris) and at the Antibes Jazz Festival in Juan-Les-Pins.


In 1983 Astor Piazzolla invited Richard Galliano to be the bandoneon soloist at the ComÃ©die FranÃ§aise in his original music to accompany William Shakespeare's "A Midsummer Night's Dream", directed by Jorge Lavelli. It was the beginning of a long friendship between the two men that lasted until Piazzolla's death in 1992.

During this period he also composed numerous original works, many of which were acclaimed by both the press and the public.

IIn 1993 the AcadÃ©mie du Jazz awarded him the Django Reinhardt prize, naming him best jazz musician of the year. The same year, he recorded the album Viaggio, his first as part of an exclusive contract with the Dreyfus Jazz label, with BirÃ©li LagrÃ¨ne (guitar), Pierre Michelot (bass) and Charles Belonzi (drums). Nominated for the annual Victoires de la Musique, the album received the Django d' Or prize for best album of the year..

In 1999 Richard Galliano recorded his sixth album for Dreyfus Jazz, Passatori, in Florence, Italy, with string players from the Tuscan chamber orchestra L' Orchestra della Toscana and pianist Stefano Bollani, playing a program of original compositions and works by Astor Piazzolla. Passatori was nominated for the Victoires de la Musique.

Dreyfus Jazz released a three-disc boxed set of unreleased concerts the same year, comprising a solo album recorded at the Umbria Jazz Festival in Orvieto on December 31, 1998, a duo with Michel Portal recorded in Hamburg on October 29, 1998, and a trio with Daniel Humair and Jean-FranÃ§ois Jenny-Clark recorded at the Montreux Jazz Festival on July 10, 1996.

The year 2001 saw the release of two albums - Gallianissimo and Face To Face. The first is a greatest hits compilation of his years with Dreyfus Jazz and the second a new studio recording in a duo with Eddy Louiss. The latter won the 2001 Django d' Or prize and was nominated for the Victoires de la Musique.

All that without forgetting the re-issues of Blue Rondo Ã  la Turk (1980) and Blues sur Seine as a duo with the cellist Jean-Charles Capon, Salsamba (1983) with Chet Baker (trumpet) and Brazilian musicians, Spleen (1985) with a Latin quintet in which Richard Galliano played melody on the accordina (keyed wind instrument) and Panamanhattan (1990) as a duo with the American bassist Ron Carter.

Richard Galliano has never worried about being the world' s best accordionist but rather has always been concerned with giving his audience the very best of himself, of "playing the music of his world", and of delving into his diverse musical roots - Italian, Mediterranean, jazz, French chanson, and classical music.

He has inspired the entire new generation of international accordionists. Today many young musicians to play his music and "copy" his style (the are more than 50 versions of his "Valse Ã  Margaux"). In addition some of his former students have embarked on interesting and rich musical careers, including Peer Glovingen (with Gidon Kremer) and Daniel Mille.

In August 2002, for the yearly Down Beat Poll, Richard Galliano is arriving first of "new generation" in the category "miscellaneous instruments".

In May 2003, Richard Galliano is appearing with Michel Portal at the Scala of Milano (recording of the Live album "Concerts").

In the years 2004/05, after the recording of the New York Trio album, Richard is touring extensively with the American rhythm section : either Larry Grenadier on bass and Clarence Penn on drums, or Clarence with Scott Colley on bass. The second trio tour culminates at the Theatre des Champs ElysÃ©es in Paris in May 2005. In June of the same year, Richard is back to Paris to record a DVD of the Piazzolla Forever Septet at the Theatre des Bouffes du Nord, the exact place where the project had been launched three years before : after 250 concerts given worldwide, the septet is ending their collaboration in the venue of their start, though this high profile event will still remain available in the future for special concerts.

In March 2006, R.Galliano invited with his New York rhythm section the very special guest Gary Burton, world famous top vibraphone master, at the initiative of the CitÃ© de la Musique in Paris, and this project tours extensively and will be touring again in the autumn 2007. A recording took place in New York in August 2006, and will see the light in September 2007 for the Italian label Camjazz.

But it is definitely the Tangaria project, a special quartet with violin (the incredible Alexis Cardenas from Venezuela), bass (Philip Catherine's mate Philippe Aerts), and another fine player from Venezuela, percussionist Rafael Mejias, with the Brazilian special guest on mandolin, Hamilton de Holanda, that will be the highlight of the year 2007, with an extensive tour in the summer 2007, adding the fine drumming of Clarence Penn. Recorded with some Brazilian special guests in Sao Paulo in September 2006, the album will be out in February 2007 for Milan Records, a label which is very familiar to the work of Astor Piazzolla.

If You Love Me