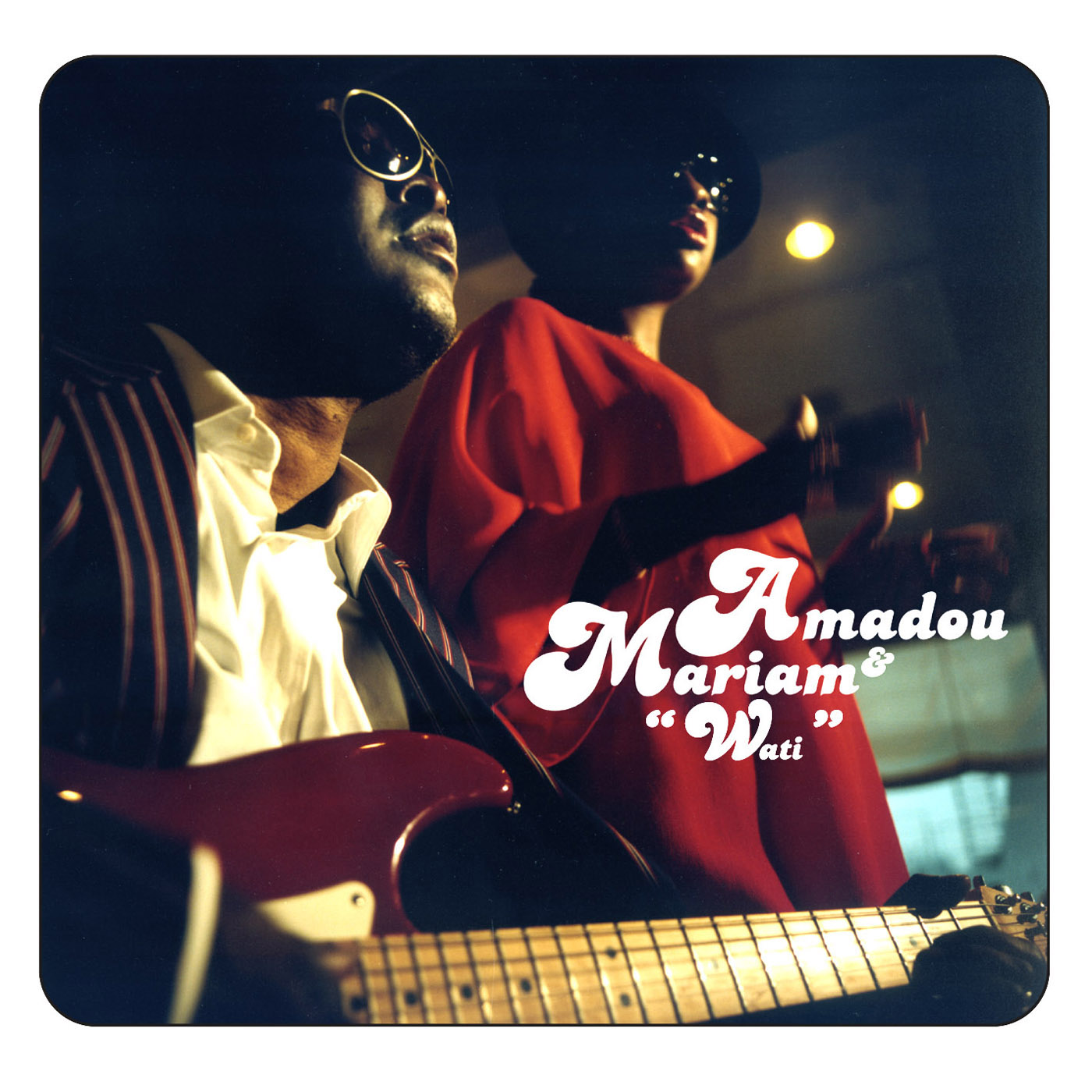 West of West Africa is America and it is in his hottest funk that WATI is deeply and ecstatically immersed. Amadou & Mariam have added a bewitched groove and psychedelic crescendos without compromising the spiritual harmonies of their music. It is a natural evolution. Today the music of Amadou & Mariam is like a travelogue of the voyages that the blind couple from Mali has made since they became an international sensation.

Paris, 28 June 2002 â Four years after the success of Je pense Ã  toi, Amadou & Mariam, the famous blind duo from Mali, are back at the forefront of the music scene with a new album entitled Wati (Time). Inspired as always by a hot mix of 70s funk and soul, the duo take their fusion style one step further on Wati, whipping up a melting-pot of styles and working with an eclectic range of guest stars including M, Cheick Tidiane Seck, Jean-Philippe Rykiel and ragga/salsa star Sergent Garcia.

There's no mistake about it, Amadou & Mariam's new album sets up a process of genuine exchange between musicians from all walks of life. Topping the list of guest stars comes France's minimalist pop star M, putting in a fine performance on solo guitar and keyboard wizard Jean-Philippe Rykiel. Then, of course, there's Amadou's childhood friend Cheick Tidiane Seck, whipping up his own distinctive musical mix on the Hammond organ and the marimba (wooden xylophone). Ragga salsero Sergent Garcia also repays the favour Amadou & Mariam rendered him last year, guesting on his latest album Seremos. But then that's only natural given the salsa links that extend between Cuba and the African continent.

"Salsa's always been pretty big in Mali," explains Amadou. "Everyone knows it! In the 60s it was seen as the most modern form of music and a lot of Malian bands used to play salsa â although, I have to admit, it was salsa arranged Mali-style! That's the music I grew up with too. I actually started out playing salsa." The Cuba-Mali connection was reinforced this spring when Amadou & Mariam met up with Sergent Garcia, the former guitarist with punk outfit Ludwig Von 88 at the "Printemps de Bourges" festival in France. Bumping into Garcia backstage between their respective sets, the Malian duo were struck by a certain Cuban lullaby the Franco-Spanish star was humming under his breath. In fact, Amadou and Mariam's ears pricked up even more as the melody picked out the same familiar line as the traditional African chants they had grown up with.

"I think one of the things that helped us click on a musical level," says Garcia, "is our countries' joint history of slavery and all the trading between Africa, Europe and the U.S. When we met at the Printemps de Bourges and I started singing my lullaby Amadou and Mariam immediately recognised the song. In fact, they recognised the melody but they knew the song with different words." Crossing frontiers, borders and oceans, the lullaby brought the three together for an impromptu jam session which finally led to them team up for a proper recording session. The lullaby Baroni appears as one of the tracks on Amadou & Mariam's new album. Mariam describes the song as "sort of pillow talk between lovers. You know, it's that little space in time where a man and a woman get to say soft, tender things to one another. It's lovers' talk!" she insists with a smile.
Amadou takes a rest on Baroni and leaves his wife to indulge in a spot of lovers' cooing with Garcia. The guitarist explains that the idea of recording a track in Spanish was a deliberate step on the new album. "We didn't want to do songs that were specifically in French or Bambara," Amadou says, "so that's why singing in Spanish seemed like such a good move. We knew that we wanted the new album to revolve around Malian music â but at the same time we wanted it to have a universal touch. We wanted it to be the kind of music people could listen to anywhere." And, judging by the extensive dates squeezed into Amadou and Mariam's summer tour (20 July â 16 August), the pair are well on the way to attaining their international ambitions. Besides numerous concerts in France, Amadou and Mariam will also be playing dates across Denmark, Austria and Italy â not to mention the U.S.

"We're delighted to have this opportunity of embarking on an international tour," says Amadou, "One of the things that matters most to us is that our music should move ahead and reach the maximum amount of people possible. It's really important that our songs' message of love, peace and justice should reach the ears of people everywhere. And that's why we're so overjoyed to have this opportunity of playing a series of international shows." What's more, given the opening of new musical horizons on Wati - which features much stronger funk and groove rhythms than the couple's former work â the Malian pair look set to prove a big hit on the international scene.

However, despite forging towards new musical horizons, Amadou & Mariam have lost none of their musical identity or early inspirations. You only have to look at the graphics on the new album cover to confirm that! With its 70s-style photo and groovy lettering, the cover of Wati could easily pass for an old Curtis Mayfield or Isaac Hayes album. "Well, that's hardly surprising given that a lot of our musical mixes are inspired by one very formative period in our lives," explains Amadou, "We used to be into a lot of James Brown and English pop music that we listened to on the radio or cassettes."

70s nostalgia is not the only order of the day. On tracks like Les temps ont changÃ© (Times have changed) the duo also mourn the fact that certain moral values have disappeared from Malian society these days. "It's a question of time (or "wati" in Bambara), they say, "In the old days teenagers and old people could sit down together and listen to each other. Everyone got along fine and it was easy to sit round and discuss social problems and try and come up with a collective solution. But things have really changed in Mali now. Things have become very individualistic. People just want to live in their own little world and think about no-one but themselves. There was a time when people genuinely respected each other and went out of their way to help one another. But â as we say in Les temps ont changÃ© - these days it's a case of an eye for an eye, a tooth for a tooth. It's a dog eat dog world!"

Be that as it may, Amadou & Mariam are still confident in the musical message they put across in their songs. In a world which, ironically they cannot see â but which they still manage to decipher better than many of their sighted counterparts â this talented Malian duo knock out a mix of funk, soul and good old-fashioned blues that's absolutely guaranteed to blow you away! 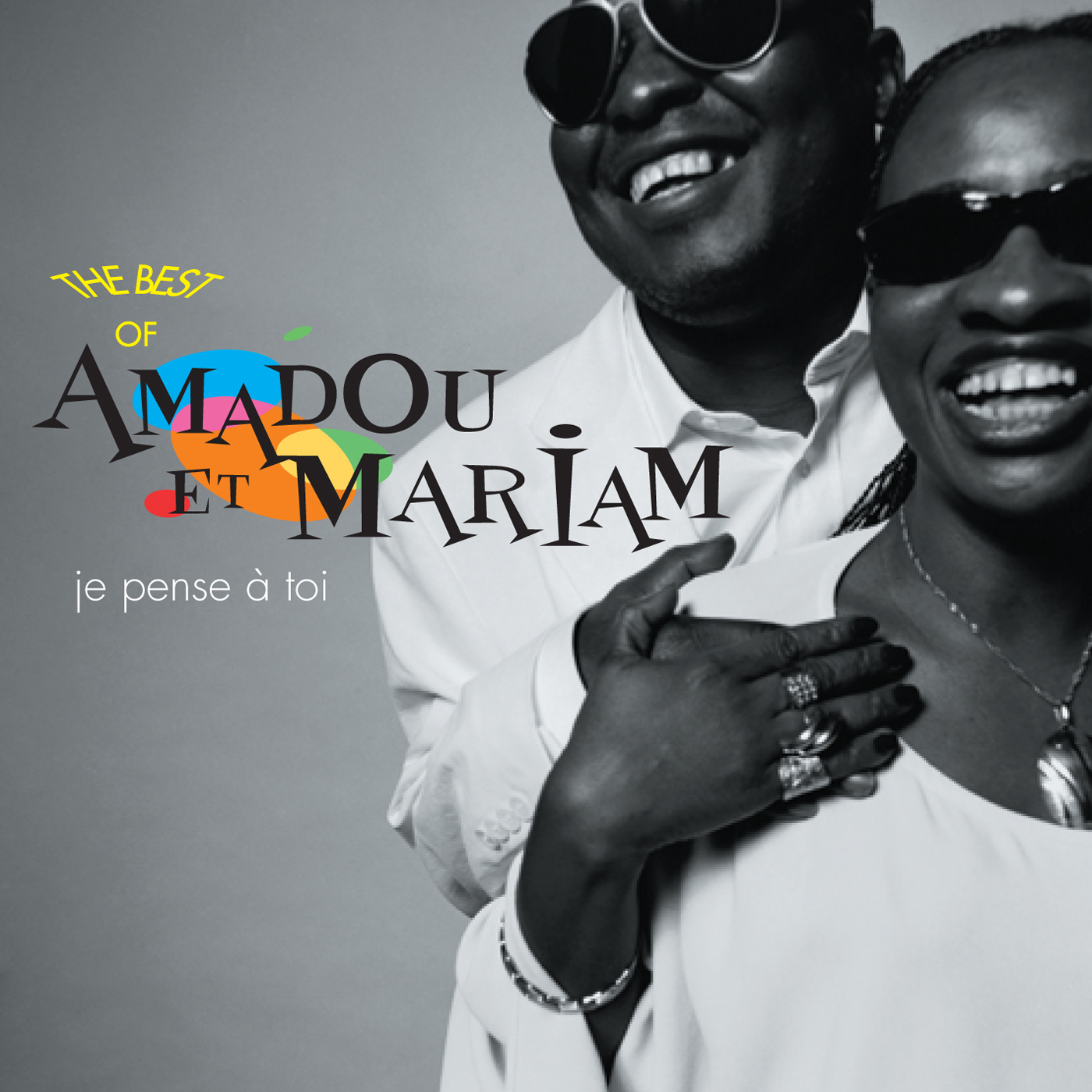 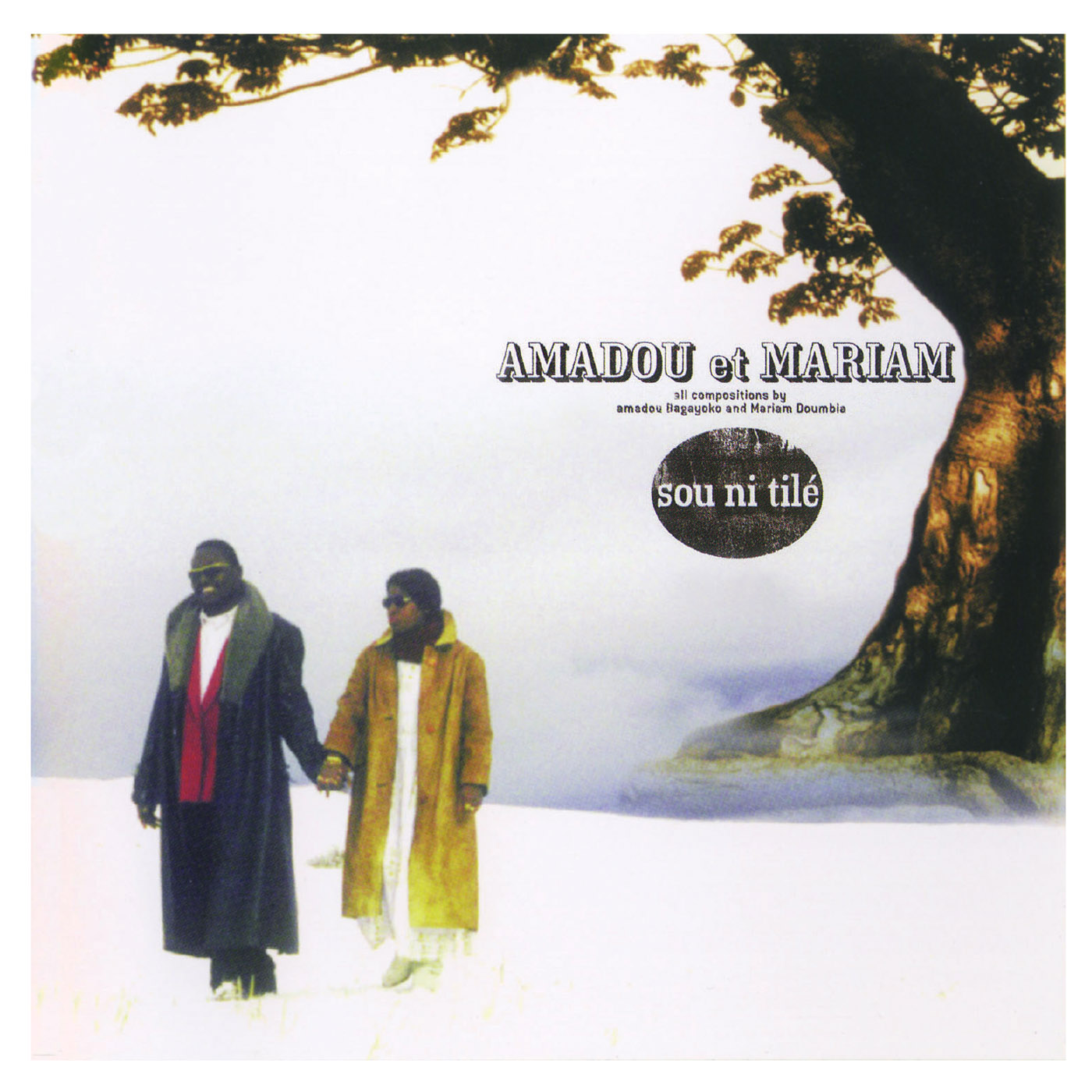 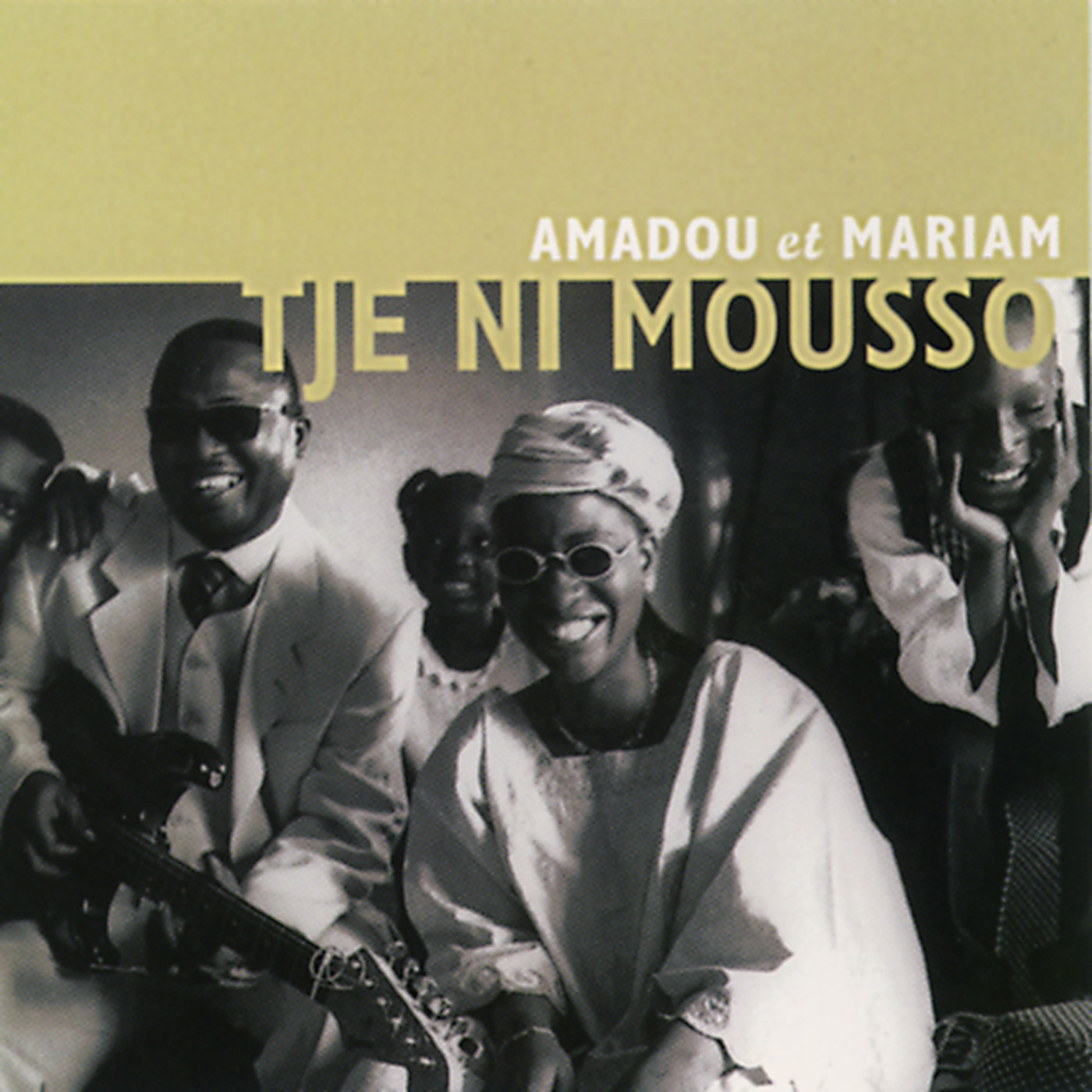