Living In Sound: The Music of Charles Mingus 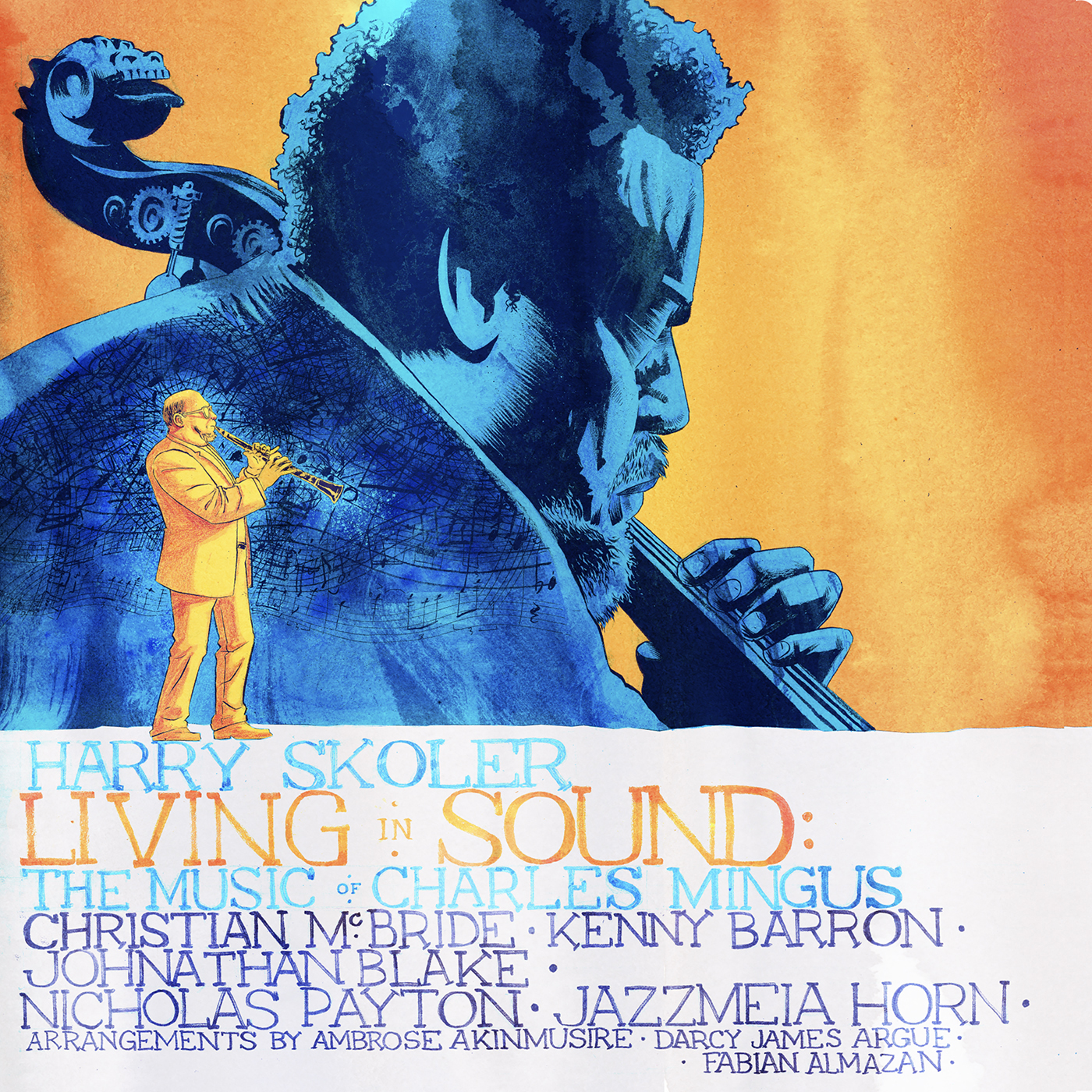 The righteous and bombastic nature of the great bassist/composer Charles Mingus made him a polarizing personality. His unique personality, combined with his groundbreaking music, were magnetic for open-minded listeners. Clarinetist Harry Skoler discovered Mingus and his music early in life. This discovery would change his entire trajectory as a person and musician, which Skoler celebrates on his new recording, Living In Sound: The Music of Charles Mingus.

Skoler had a challenging adolescence while growing up in Syracuse, New York during the 1960s and early 1970s. While seeking solace from a traumatic event, he discovered the world of Charles Mingus, initially from the bassistâs Mingus Moves LP (Atlantic, 1974). The overwhelming impact on Skoler led him to investigate both Mingusâs legendary musical oeuvre and his autobiography, Beneath the Underdog. Mingusâs words and music resonated with the young musician. It is as though he had found truth in the work of one artist.

It wasnât long before Skoler was able to experience Mingus in the flesh at Syracuse Universityâs Jabberwocky student club. The experience was beyond anything that Skoler had experienced up until then. Mingusâs powerful presence and command were larger than life. The experience was imprinted deeply on Skoler and is represented in an original graphic story by Dave Chisholm included with Living In Sound.

Over forty years later, Skoler already had a wonderful career as a working musician and professor at the celebrated Berklee College of Music. In 2018, his life was saved from a ruptured artery; then depression set in. This is when Skoler met saxophonist Walter Smith III. Meeting Smith proved to be the catalyst and spark that Skoler needed. Skoler immediately felt that he needed to record again and asked Smith if he would be willing to produce a new album, to which Smith agreed.

It was the collaborative effort of Skoler and Smith that proposed a project celebrating Mingus with strings. Skoler was excited by the possibilities and the project went forward with Smith suggesting the string quartet, jazz accompanists, and arrangers for the pieces. The producer was able to gather an all-star group, which included pianist Kenny Barron, bassist Christian McBride, drummer Johnathan Blake, trumpeter Nicolas Payton, and vocalist Jazzmeia Horn. A string quartet of violinists Megan Gould and Tomoko Omura, with violist Karen Waltuch and cellist Noah Hoffeld was also commissioned.

The recording features arrangements by some of the brightest compositional minds in jazz, namely Darcy James Argue, Ambrose Akinmusire, and Fabian Almazan. The pieces to be performed were selected ad hoc by the arrangers or by Skoler and Smith. The arrangers were trusted to do whatever they wanted in the arrangements. The pieces were ready in August 2021, when Skoler met the band and string quartet at Sear Sound for two days of recording.

The recording begins with Fabian Almazanâs arrangement of âGoodbye Pork Pie Hat,â bittersweet strings leading to Skolerâs laid back reading of one of Mingusâs most beloved tunes. Darcy James Argue twists âPeggyâs Blue Skylightâ dramatically, as the rhythmic strings bounce intricately off one another and McBride and Barron stretch out on their individual solos. Argue created a perfect showcase for Skoler on âDuke Ellingtonâs Sound of Love,â providing an at times lush, then spare, arrangement allowing the clarinetist to dial into the same wistful feelings of respect and love for Mingusâs hero, Duke Ellington, with the aid of McBrideâs supportive bass.

Mingusâs striking âRemember Rockefeller at Atticaâ is filled by Almazanâs pen with the chilling effect and violence that its namesake event inspired; Skolerâs pained screaming through his clarinet, and Paytonâs thoughtful trumpet are highlights of the recording. Akinmusireâs arrangement of Don Pullenâs âNewcomerâ is nuanced and deep, the tune being from the Mingus Moves LP that was the origin of Skolerâs Mingus appreciation. Brilliant vocalist Jazzmeia Horn brings Doug Hammondâs âMovesâ to life, the subtlety and strength of her voice amplified by the meditative tone poem arranged by Almazan.

Argue chose to tackle âSueâs Changesâ for a thrilling and inventive suite with ever changing emotions and transitions, played masterfully by the ensemble and providing Payton some true solo highlights. âInvisible Ladyâ is a gorgeous, mysterious piece loved by Skoler; Akinmusireâs arrangement provides languid, noirish tones. Skolerâs original, âUnderdog,â was completed under the wire, although the conception was developed over months. The composer wrote the piece just prior to the final recording session as a sketch that provides freedom for all the musicians to express themselves without hindrance.

The music that Harry Skoler, Walter Smith III, and their brilliant cast recorded on Living In Sound captures the many moods of the iconoclastic Charles Mingus. There are shades of tumult, harmonic depth, conceptual depth, and abandon. A perfect tribute to the legend to mark his centennial year.