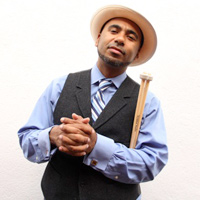 Multitalented composer, arranger, music educator, and jazz percussionist Ali Jackson is the ultimate modernist drummer of our times. He is considered to be one of the most versatile and innovative musicians of our times. From performance stages in the U.S., to historic concert halls in Europe, and outdoor venues in Canada, Asia, or Africa, he has gained a reputation of performing with remarkable technique, originality, and deeply felt passion. Jackson is known to create a strong portrait of emotions through his playingâwith vivid dynamism, energy, intensity and technique. The rhythm of music is all around us, beating and vibrating in everything that we encounter. It informs who we are as citizens of a global community. With this in mind, Jackson, uses the compelling and pulsating sounds of bebop, swing, funk, ballet, gospel, and classical influences to make us feel music in everything that we do. This 2012-13 season marks his 7th year as principal drum chair with the internationally recognized Jazz at Lincoln Center Orchestra with Wynton Marsalis. He continues to follow in the tradition of important drummers to bring a deeper, fuller expression of music and life, sound and rhythm to audiences across the world.

Born in New York City, April 3, 1976, art and music education was an integral part of his upbringing. Shortly after relocating to Detroit, Jackson found himself immersed in serious study, mentorship, and training. His strong devotion to music started as a youth. Ali began playing drums at the age of 2 and piano at the age of 5. His father great Jazz bassist Ali Jackson Sr. gave him an intense introduction to jazz music. He began playing professionally on the streets of Detroit with his father at 8 years old. Aliâs aptitude and passion for music and rhythm took off. At the age of 11 his ability was reinforced by Max Roach, Milt Hinton, Dr. Donald Byrd Betty Carter, Aretha Franklin and James Mtume. While in elementary school, world-renowned jazz trumpeter Wynton Marsalis recalls meeting him at age 12 and being impressed by his debonair demeanor and exemplary knowledge of the piano, although he was introduced as a drummer. Being raised in an open music environment afforded Ali to explore and experience various ethnicities. This freedom gave him the opportunity to soak up the feeling and meaning of other cultures.

In 1993, he graduated from Cass Tech High School with high honors. In 1994 was selected as the guest soloist for âBeaconâs of Jazzâ awarding Max Roach. The Thelonius Monk Institute and Jazz Aspen selected him to participate in the first annual âJazz Aspenâ for talented and gifted musicians in June 1996. Ali was first to be selected for Michiganâs prestigious Artserv âEmerging Artistâ award in 1998. Thereafter, Jackson began to receive international notoriety on his maiden voyage European tour with his uncle jazz drummer Oliver Jackson in the fall of1993. As a student at the New School University he was privileged to study with Max Roach and Elvin Jones.

Beyond the performance stage, Jackson takes a leading role in advocating arts and musical education in building stronger communities across the world. As an advocate of the arts, music, and the humanities, Jackson believes that the power of jazz education helps students cope with life experiences, by creating a positive mindset and working together for a common goal. Jazz music is about listening and learning from one another to create stronger relationships. With this in mind, Mr. Jackson worked with various institutions and organizations to share the power of jazz music across the world. He has given lectures on jazz and culture at New York University, Stanford University, Eastman College of Music, Columbia University, and West Virginia University, just to name a few. Additionally, he has participated with âJazz in the Schoolsâ a program designed to introduce the importance of jazz music to young people, facilitated by Jazz at Lincoln Center. His successful participation with âYoung Audiences,â a music education program for Tri-State area grade school students has also afforded him the opportunity to teach and train under served communities about the significance of American jazz history.

His passion for jazz education has also taken him beyond the United States into other areas of the world. As part of his 2012 international tour with JALC in Cuba, he held a series of music clinics and donated drum equipment to aspiring young musicians in the poorest town of Havana. In 2004 Jackson returned to Detroit and donated instruments and conducted numerous master classes in the effort to improve music knowledge and awareness for Detroit Public School students. He continues to share his passion for jazz through JALC educational outreach projects and self motivated endeavors. Jacksonâs musical knowledge has been shaped by a diverse musical career. He has been inspired by many musical genres including blues and funk, classical, latin jazz, gospel, and musical influences from Africa, Asia, Europe, and the Caribbean. His discography and performance archive include Wynton Marsalis, Aretha Franklin, Tony Bennett, Faith Hill, James Morrison, Dee Dee Bridgewater, George Benson, Harry Connick Jr. Marcus Roberts, KRS-1, Joshua Redman, Vinx, Seito Kinen Orchestra conductor Seiji Ozawa, New York Philharmonic, London Philharmonic Orchestra, and the New York City Ballet.

Most recently Ali Jackson has released âBig Brown Get Downâ (Bigwenzee Music, 2007) a live release that explores the spontaneity of jazz, featuring Wynton Marsalis, Rob Hurst and Aaron Goldberg. The JALC release âCongo Squareâ (2007) features Aliâs diverse and swinging conscience to the music. He is featured on Wynton Marsalisâ latest recording âFrom the Plantation to the Penitentiaryâ (Bluenote, 2007). Ali collaborated with young jazz masters Cyrus Chestnut, Reginald Veal and James Carter on âGold Soundsâ(Brown Brothers, 2005) that transformed indie alternative rock band Pavement songs into unique virtuosic interpretations with the feeling of the church and grit of the juke joint. Ali can also be seen with HIH (Horns in the Hood) musically diverse ensemble that explores the drums, bass, and woodwinds. âWheels Keep Rollinâ (Bigwenzee Music, 2009) features original compositions inspired by the root music of America and âswingâ rhythm of Jazz. Aliâs voice and virtuoso drumming is featured on the best selling book series âBaby Loves Jazzâ. Ali was featured on a segment featuring the Jazz at Lincoln Center Orchestra and Wynton Marsalis (CBS, 2011), Ali is featured on âTwo Men with the Blues: Wynton Marsalis & Willie Nelsonâ (2009) âMusic of Ray Charlesâ: Wynton Marsalis, Willie Nelson (2011) CD & DVD. In 2010, Jackson found himself as executive producer to present an original work, âBeats of NYCâ. This project blended the musical idioms of Congolese, Senegalese, Tap, and modern dances juxtaposed with various styles of spoken word and the history of the blues. His collaborations with artists continues to push the envelope of Jazz music and itâs ubiquity to the human spirit.