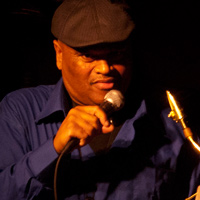 Azar Lawrence grew up during an era of prolificacy and transcendence in Jazz music that to this day has stood the test of time. He's composed, produced and performed with acclaimed jazz luminary McCoy Tyner for over five years and Elvin Jones for many years. While very young Azar began playing with many jazz legends and at such an early age his first professional gigs abroad (he was of the age seventeen) was with Clarke Terry and Muddy Waters.
He's produced and performed for decades with musicians on the cusp of the vanguard, whether it was the late great Frank Zappa or wailing on the sax in a rap video with Busta
Rhymes. His performance with Miles Davis at Carnegie Hall where Dark Magus was recorded live is hailed to this day and noted in Miles' autobiography.
At age five he would begin his first formal music lessons on violin and piano under the direction of his late mother Ima Lawrence. Ima was a gifted classical pianist and teacher.
Azar began playing with the USC JR Orchestra at the age of five and by eleven years old he would become Second Chair. His musical foundation began in piano and violin but then he was introduced to alto sax by a friend of the family and began taking lessons.
In high school Azar played with the Dorsey High School Jazz Workshop where he became friends and shared many musical ideas with pianist and his mentor Herbert Baker. Azar also performed in high school with the Horace Tapscott Arkestra where he met and became close friends with Reggie Golson; the late son of Benny Golson. Reggie and the Golson family became very instrumental in Azar's musical journey in Jazz.
After high school at the age of 19, Azar played with George Cables, Candy Finch, Larry Gales, and Woody Shaw at a regular gig at a Los Angeles club on 54th St. Soon he would perform with Ike & Tina Turner, the Watts 103rd St. Band, and War. At age 20 Azar was introduced to Elvin Jones (at the 'Lighthouse') by his docent Reggie Golson. Within a week of meeting Elvin, Azar would leave Los Angeles for New York to become a member of Jones' band 'Jazz Machine.' After a few years with Jones he then became a member of McCoy Tynerâs group.
Over the years Miles Davis would attend Azar's New York concerts when he was with McCoy Tyner; and, as well as when he was with Elvin. Miles approached Azar about joining his
group. Azarâs first performance with Miles was in Washington DC and then they performed and recorded Dark Magus (1974) live at Carnegie Hall in New York.
After five years with McCoy Tyner, Azar rejoined Elvin Jones for a while, and during that time he recorded with Roberta Flack.

Azar has been a force since he graduated from high school, releasing several albums of his own before the age of twenty-five; Bridge Into the New Age, People Moving People, and Summer Solstice, Shadow Dancing and People Moving. In recent years he released Legacy and Music of John Coltrane, Speak The Word and Prayer For My Ancestors. During the eighties he wrote and performed for Earth Wind Fire, on their highly acclaimed release Powerlight. He collaborated with Earth Wind & Fireâs leader Maurice White.
Azar is known to bring jazz to popular music and he can also be heard on the late Frank Zappaâs music to playing in Busta Rhyme's video, In The Ghetto. His credits are numerous
from early on one being the highly acclaimed Grammy award winning album; Marvin Gayeâs, Hear My Dear.
Also during the eighties Azar began melding his sound with what some have described as "psychedelic Jazz Funk" and began to write songs even more seriously than when preparing
for his first three projects while recording for Fantasy records. He began working with Chuck Jackson who is known in part for his role as producer for all of Natalie Coles hit recordings.
They co wrote twenty songs all of which were placed on projects such as Stanley Turentineâs, Coming Home. He formed the band, Chameleon, which recorded for Electra Records. Patrice Banks, (Chocolate) of Grande Central Station was a member of that team.
Recent productions Azar can be heard on are 'The Cookers, Cast The First Stone' - 2011 and 'Platinum' The Headhunters -2011. Hitting hard live and in recorded music these days Azar has written new compositions as a follow up to his 2010 release, (that received several Best of' 2010's) 'Mystic Journey.' He's co-produced a new CD with Seth Abramsom, Grammy Winner and Artistic Director for the Jazz Standard in New York.
The track titles of his upcoming CD reflect Azar's sound equations as a part of a continuum of his musical philosophy to "seek knowledge, wisdom and truth." Azar Lawrence 'The Seeker' -Live at The Jazz Standard, is due to drop mid 2013.
Page 2 Azar Lawrence