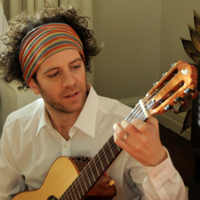 âKeith Ganz is hands down one of my favorite guitar players on the planet.â â The Hook, Charlottesville, VA Weekly Arts Paper

Keith's work as guitarist, arranger and producer on Kate McGarry's "If Less is More...Nothing is Everything" (Palmetto) helped garner a 2009 Grammy Nomination for Best Jazz Vocal Album. In 2012, they released their fourth album together for Palmetto Records, the critically acclaimed "Girl Talk". After a productive eleven-year stint in the jazz crucible of New York City, Keith and Kate now reside in Durham, NC where they have just recorded their first live duo album, "Genevieve & Ferdinand", to be released in 2013.