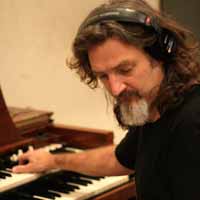 Composer, arranger, conductor, keyboardist and music educator. He began his piano studies at the age of 8, learning âThe First Lossâ (âErster Verlustâ) by Robert Schumann. Such initiation prompted him to seek after a tragic sense in music. This he has accomplished sometimes, while others he has achieved the opposite, attaining not quite as desirable humorous results.

He bears the nickname âPolloâ since the age of 13, and still holds ambivalent feelings towards it.

He has led various influential groups in the Argentinean contemporary popular music scene, such as El GÃ¼evo (âThe Eggâ) in the 80âs and Monos con Navajas (âMonkeys with Knivesâ, co-led with bassist Willy GonzÃ¡lez) in the 90âs, which was commended by the Konex foundation as one of the top five jazz ensembles in the decade spanning 1985-1995.

Since 1990, he has been carrying out extensive teaching activities in the areas of arranging, composition, keyboards and ensemble workshops, making idle efforts not to arouse in his students his own obsessions. He is currently teacher at the Escuela de MÃºsica ContemporÃ¡nea (EMC) in Buenos Aires, professor at the NYU in Buenos Aires study abroad program, and director of the St. Andrewâs School Former Pupilsâ Club Band.

He is devoted to writing his own music and organizing ensembles for its recording and public performance. At this moment, he is leading his quintet âRaffoâ in presenting his CD, âDiatÃ³nicos AnÃ³nimos / MÃºsica de Flores, Vol. 2â, and giving solo piano recitals performing his original compositions.


Degrees:
2000
Master of Arts in composition. New York University, New York City, USA.
Graduate study realized upon receiving a Fulbright scholarship in 1998. Composition studies with Jim McNeely, Marc Consoli, Mike Holober and Justin Dello Joio.
1989
Diploma with a Major in Jazz Composition. Summa Cum Laude. Berklee College of Music, USA.
Under-graduate study carried out upon obtaining a scholarship at the Berklee Summer School in Buenos Aires in 1987. Composition studies with Ken Pullig, arranging with Herb Pomeroy, piano with Ray Santisi and improvisation with Ed Tomassi and Gary Burton.
Extensive extracurricular activity as a writer for some of the most outstanding ensembles in Berklee: the Berklee Concert Jazz Orchestra (directed by Herb Pomeroy), the Rainbow Band (directed by Phil Wilson) and the Brian Lewis Big Band.


Other studies:
1979-1982
Private lessons in classical composition with Enrique Cipolla and in jazz composition and arranging with Juan Carlos Cirigliano.