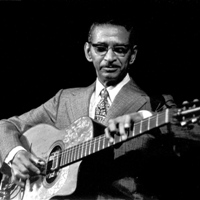 Oscar Marcelo AlemÃ¡n, was an Argentine jazz guitarist.
Oscar Marcelo AlemÃ¡n, talented singer, dancer, entertainer, and guitarist, was born in Chaco Province in Northern Argentina on February 20, 1909. At the age of six, he was dancing and singing with his family's folk ensemble, the Moreria Sextet playing the cavaquinho, a Brazilian ukelele[1] before taking up the guitar. By the age of ten, after his mother had died and father had committed suicide, he found himself an orphan working sporadically as a dancer and musician on the streets of Santos.

In 1924 AlemÃ¡n met and began working with Brazilian guitarist Gaston Bueno Lobo. The duo was signed to the prestigious Argentine Victor label and performed under the name Los Lobos. On occasion, they would add violinist Eleven Verdure and recorded under the name Trio Victor.

In the 1930's, having discovered American Jazz via Eddie Lang and Joe Venuti , AlemÃ¡n moved to Paris where he was immediately hired by Josephine Baker to lead her band, the Baker Boys at the Cafe de Paris. This provided him an incredible opportunity to play regularly with American Jazz musicians who would come to see Josephine and sit in with her band.

AlemÃ¡n later formed his own nine-piece band which would play nightly at the Le Chantilly, just across town from where Django Reinhardt and his partner violinist Stephane Grappelli would be performing at The Hot Club of France with their Quintet. Although these two geniuses of the guitar never recorded together, they became close friends.

In 1939, jazz critic Leonard Feather visited Paris. He returned to America raving about his new âdiscoveryâ and stated, âAlemÃ¡n has more swing than any other guitarist on the continent.â

AlemÃ¡n relocated to Buenos Aires in the early '40s and continued to record and perform with both a swing quintet, as well as with a nine-piece orchestra.

In 1972 at age 63, AlemÃ¡n recorded a new album which met rave reviews and helped re-launch his career with the reissue of many of his previous recordings, along with concert dates and television appearances.

He continued to teach and perform in his native Buenos Aires until his death in 1980.

(courtesy of All About Jazz)