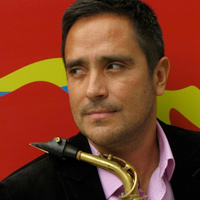 Popular music has known many "double threats". The ability to both play and sing has positioned numerous jazz artists for stardom, going back to Louis Armstrong and Fats Waller, on through Nat King Cole, Chet Baker, George Benson, and more current examples such as Harry Connick, Jr., Jamie Cullum, and Esperanza Spalding.

However, Houston-based vocalist/saxophonist David Caceres offers a rare combination: a soulful, emotive voice with the potential to connect with a varied adult audience and the skills as an alto saxophonist to go toe-to-toe with the best players of his generation. Indeed, Caceres's raw talent and natural charisma make him a sure bet to cross boundaries and unify audiences. Of course, this embarrassment of riches presents an obvious challenge: How can these diverse talents come together to create a focused presentation within a singular point of view? With David Caceres, this uniquely talented artist answers this question definitively and with great passion and vision.

Featuring an impressive lineup of some of New York's finest musicians, these tracks cover a wide stylistic swath without losing focus. From his deeply emotional reading of Maxwell's "Symptom Unknown" to the funkified take on Van Morrison's classic "The Way Young Lovers Do" on through the uplifting original "Sacred Path", this project signals the arrival of a major new voice in popular music.

...rare combination: a soulful, emotive voice with the potential to connect with a varied adult audience and the skills as an alto saxophonist to go toe-to-toe with the best players of his generation. David Caceres comes from a family with a rich musical heritage. His grandfather, jazz violinist Emilio Caceres, led a popular swing orchestra in San Antonio, Texas in the 1930's & 40's. However, to jazz fans the Caceres name is familiar due to the work of his great uncle Ernie Caceres, who played saxophone and clarinet with the Glenn Miller, Benny Goodman, and Woody Herman big bands.
"I remember when I was about five years old, staying over at my grandparent's house, and seeing my grandfather in his tux heading out for a gig and I wouldn't see him till the next morning. I understood that my father and uncle were musicians, but it wasn't until I was around 12 that I heard the last record they did together in 1969. There was an extensive bio in it about my relatives and I used to read it all the time. Although I didn't really understand the language they were playing, I felt connected to it and the music was definitely making an impression on me."

Moreover, David's maternal grandfather, Manuel Rangel, owned a major Latin music record retailer, label, and distribution company, and his mother managed the store, called "Sound of Music," throughout his youth. He was constantly exposed to all types of music, both when he visited his mother at work and when she brought home promotional copies of the latest releases. Growing up in this environment, it's no surprise that young David found himself beginning piano studies as an eight-year old. By eleven, he picked up the alto saxophone. "Of all of the instruments, the alto seemed to most emulate the human voice and I was also intrigued by the complexity of all the keys."

Later adding soprano, clarinet, and flute to his arsenal, he embraced the work of John Coltrane, Charlie Parker, Miles Davis, and Sonny Rollins. Caceres began performing professionally around San Antonio, and as he approached his high school graduation, he was presented with the chance to further his pursuit of a career in music thanks to a scholarship to Boston's prestigious Berklee School of Music. Although he had done a little singing in garage bands while growing up, it wasn't until he was at Berklee that he had the opportunity to express himself vocally. "There was a wedding band that needed a sax player who could also sing a few tunes. I had never sung publicly but I figured what the hell? I knew I could at least sing in tune - how bad could it be?"

Vocally, David had been exposed to a wealth of classic soul and R&B, with Stevie Wonder and Earth Wind & Fire, standing out is early influences. Over time, he also absorbed the work of Otis Redding, Jackie Wilson, Prince, and Brian McKnight, in addition to Frank Sinatra, Sarah Vaughan, and of course the great Donny Hathaway.

"When I was at Berklee, I got to know Donny's daughter Lalah, and she gave me a cassette of a rare live recording of her father. I knew of Donny from his duets with Roberta Flack but never had I heard anything like this. It was so powerful and emotional. The man was pouring it all out. Lalah said that her father ended his life shortly after that recording. I've always thought you could hear the pain the man was singing through."
Following his graduation from Berklee in 1989, he made a bee line for New York, along with a group of others making the move: Roy Hargrove, Kurt Rosenwinkel, Mark Turner, Donny McCaslin, Antonio Hart, Seamus Blake, Chris Cheek, and others. David immersed himself in the scene and began to perform and hang out in clubs like Mikell's, the 55 Bar, Sweet Basil, and the Bitter End.

However, while the creative challenges that inspired him in New York were a strong draw, his roots were still in Texas, and his sense of community and musical fellowship drew him back to San Antonio. While he kept an apartment in New York and continued to return to get a creative fix on occasion, the opportunity to build an active career as a leader back home was hard to pass up. Not surprisingly, his reputation spread quickly, and he was invited to join brilliant pianist Paul English's quartet in Houston. Before he knew it, he had become a fixture on the Houston scene, expertly balancing an active performing and recording career.

...Caceres felt strongly that the time had come to make an artistic statement that embodied the heart and soul of his vision.
Recently, in addition to performing regularly with his own straight-ahead David Caceres Quartet, he has also been seen with the fusion group Stratus and a 10-piece funk outfit named TKOh! In addition, he has logged hours in the recording studio on numerous recording sessions, including Latin sensation La Mafia's Grammy award-winning "Un Million De Rosas," plus New York sessions with Deodato and Robbie Williams, among others.

Beginning in 1995, Caceres started recording under his own name, with the independently-released Innermost. The hard-burning jazz date Trio followed in 1999, and finally Reflections in 2006.

David has also been active in the world of education, having served as a faculty member of HSPVA (High School for the Performing and Visual Arts), the University of Houston, and his noteworthy career in education has earned him recognition from the National Foundation for Advancement In the Arts.