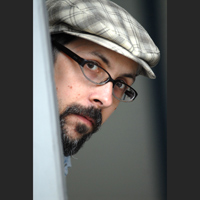 John Hollenbeck's versatility as a percussionist and composer is revealed in a body of work that challenges countless boundaries. Performances with Fred Hersh, Tony Malaby and Bob Brookmeyer have showcased Hollenbeck's melodic and sensitive small‑group jazz drumming. John's unique approach to big band work is evident as the leader of his Grammy-Nominated Large Ensemble and as a member of Bob Brookmeyer's New Art Orchestra. John's performance career stretches far beyond jazz. He has performed a variety of traditional musics from around the world, including klezmer performances with David Krakauer's Klezmer Madness and Frank London (of the Klezmatics), projects in Colombia with Antonio Arnedo, in Argentina with Fernando Tarres and with Astor Piazzolla's pianist, Pablo Ziegler, at Carnegie Hall.

As a composer, Hollenbeck combines elements of his experiences in jazz and world music. The recipient of a B.M. in Percussion (1990) and a M.M. in Jazz Composition (1991) from the Eastman School of Music, Hollenbeck has received many awards and commissions including a National Endowment grant to study composition with Bob Brookmeyer in 1994 and a Meet the Composer's Grant in 1995 and 2001. He won the Jazz Composers Alliance Composition Contest in 1995 and 2002 and was awarded the 2002 IAJE Gil Evans Fellowship and 2003 IAJE/ASCAP Commission. Hollenbeck was awarded a grant from Arts International to travel with his Claudia Quintet for performances in Brazil in the spring of 2002. In 2001, 2003 and 2007, John held a month-long residency at the Blue Mountain Center in New York, and in the fall of 2005, was a Fellow of the Wurlitzer House Foundation in Taos, New Mexico. Hollenbeck was nominated by the Jazz Journalists Association as the 'Up and Coming Jazz Musician of the Year' in 2004 and 2006 and 'Composer of the Year' in 2006. John has received nominations in the following categories in the Down Beat Magazine's Critics Poll: Rising Star Composer (2003, 2004, 2005, 2006); Rising Star Jazz Artist (2006); Rising Star Arranger (2006); Rising Star Big Band (2006); and with his Claudia Quintet: Rising Star Jazz Group (2006). John's first large ensemble recording, A Blessing, received a 2006 Grammy Nomination. In 2007, he was awarded the prestigious Guggenheim Fellowship.

Exceptionally creative and versatile, John continues to create a passionate new musical language based on world rhythms, lyricism, and spirituality: he composed The Shape of Spirit, a piece for wind ensemble which was issued on the Mons label in 1998, and in 1999 composed Processional and Desiderata for wind ensemble and orator. This composition, written for and featuring the voice and trombone of Bob Brookmeyer, was released on Challenge Records in 2001. The Cloud of Unknowing , commissioned by the Bamberg Choir in Germany was released in September 2001 on the Edel Classics label along with works by J.S. Bach, Igor Stravinsky & Paul Hindemith. In January 2002, John's IAJE Gil Evans Fellowship Commission piece, A Blessing, featuring vocalist Theo Bleckmann, was performed to critical acclaim at the IAJE Conference; and in January 2003 his IAJE/ASCAP Commission, Folkmoot, was premiered in Toronto, Canada. John composed and performed the percussion score to the following Meredith Monk works: Magic Frequencies; Mercy, which was released on the ECM label in October 2002; and her newest work, The Impermanence Project. Hollenbeck's chamber piece, DemÃ¼tig Bitten, was commissioned by the Windsbacher Knabenchor ( Germany) and released in December 2004 on the Rondeau label along with works by Giovanni Gabrieli, Josquin des Prez and J.S. Bach. John's commission through Bang on a Can and the People's Commissioning Fund was performed by the Bang on a Can All-Stars at Merkin Hall in New York City, February 2006. His latest commission through Ethos Percussion Group, funded by the Jerome Foundation, will be premiered in New York City, October 2007.

Hollenbeck released three discs on the CRI jazz imprint Blueshift: The album no images presents an eclectic composer's statement featuring Ray Anderson, Dave Liebman, Ben Monder, Ellery Eskelin, the voice of Dr. Martin Luther King, Jr. among others (October 2001), and was voted one of "the best jazz records of 2001" by Gary Giddins of the Village Voice; Quartet Lucy offers a union of spacious, understated, ethereal, and spiritual moods which reflect the influences of Brazilian and other world music folk traditions (January 2002); The Claudia Quintet release showcases tremendous wit, tasteful improvisation, strong melodies and equally strong grooves (January 2002), and was voted one of the "ten best releases of 2002" by JazzTimes magazine. In 2004, the Claudia Quintet appeared in prestigious festivals, including the Monterey Jazz Festival, following the release of its second recording, I, Claudia, on Cuneiform Records to rave reviews. In June 2005, Hollenbeck released his first large ensemble recording, A Blessing, on Omnitone Records, which received 4 Â½ out of 5 stars from Down Beat Magazine and a Grammy Nomination. In September 2005, Hollenbeck released Semi-formal on Cuneiform Records with his Claudia Quintet, and his second large ensemble recording, Joys&Desires, on Intuition Records with Jazz Big Band Graz, both to critical acclaim. In 2007, he released FOR, on Cuneiform Records with his Claudia Quintet. He is happily married to Kate Schroeder