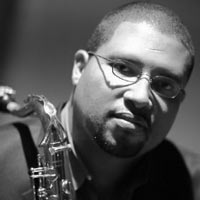 Greene was born in Hartford, CT on February 24, 1975. From a young age, he exhibited a God-given affinity for music. Greene's parents started him on alto saxophone at age six, and encouraged him to practice. As a high school student, Greene was selected to perform in several Regional, All-Connecticut, and All-New England jazz ensembles and symphonic bands. Greene's music teacher at Bloomfield High School arranged for him to meet and play for Jackie McLean at the famed altoist's community arts school, The Artists'Collective. Of his eager student, McLean commented, "From the beginning, I could tell that he was going to be an exceptional student. He already had a very mature sound and a very mature concept." McLean's teaching over the subsequent years gave the young musician a firm foundation in improvisation, a profound viewpoint of the jazz tradition, as well as the inspiration to seek his own musical identity.

Greene formed his first quintet while in high school, and began composing music soon thereafter. He was awarded a scholarship to attend the David Liebman Summer Saxophone Workshop, and during his senior year, augmented his studies at the Greater Hartford Academy of the Performing Arts under bassist/educator Dave Santoro. As a member of the Academy Jazz Ensemble, Greene won the Most Outstanding Soloist award at the 1993 Berklee College

Greene graduated from Bloomfield High School in 1993 with high honors. He continued his studies at the Hartt School/University of Hartford with Jackie McLean, trombonist Steve Davis, and saxophonists Ken Radnofsky and Kris Jensen. During his final year at Hartt, Greene performed often alongside trumpeter Claudio Roditi. In fact, Greene made his recording debut on Roditi's "Double Standards" release on the Reservoir label. At the same time, Greene entered the prestigious 1996 Thelonious Monk Institute of Jazz International Jazz Saxophone Competition. He was named First Runner-up by a panel of judges that included Wayne Shorter, Jimmy Heath, Joe Lovano, Jackie McLean, and Joshua Redman.

As a leader, Greene made considerable advances after moving to New York. In the final months of 1997, he performed with his quintet for a week at The Jazz Standard and recorded his debut album Introducing Jimmy Greene for the Criss Cross label. In a review of Greene's Jazz Standard stint, the New York Times' Ben Ratliff wrote "[Greene is] in command of harmony, and can sound very organized racing through fast tempos, but he also relaxed into ballad standards and let an intriguing personality shine through." In addition to The Jazz Standard, Greene's bands have performed in New York at The Village Vanguard, Smoke, Small's, and Birdland, in addition to tours of Russia, Brazil, and Uruguay. Greene was honored in the June 1999 issue of Down Beat magazine. The publication, looking toward the future of jazz into the 21st century, recognized Greene as one of "25 Young Rising Stars in Jazz."

Greene's subsequent return to the studio, in November 2003, produced the poignant, mature recording, Forever (Criss Cross). Greene's most recent release, True Life Stories (Criss Cross - 2006).
Recently, Greene, the composer, was honored by Chamber Music America as a winner of its New Works: Creation and Presentation Grant Program, a component of the Doris Duke Jazz Ensembles Project, and was commissioned to compose and perform a new work for the Jimmy Greene Quartet. The resulting suite, Overcomers, was debuted in New York during the quartet's January 2006 engagement at the Village Vanguard. Greene also won the prestigious ASCAP / IAJE Commission in honor of Ornette Coleman, and performed the resulting piece, Anthem of Hope, with Mr. Coleman in attendance, at the opening general session of the 2006 IAJE Conference in New York. Finally, Greene was awarded a 2005 Artist Fellowship in Music Composition by the Connecticut Commission on the Arts.

Greene is married to his high school sweetheart, and is the father of two beautiful young children. He holds faculty position at the Hartt School and the Greater Hartford Academy of the Arts, and performs in the music ministry of his home church, Glory Chapel International Cathedral.