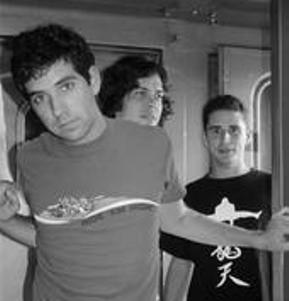 Band bio's are stupid by nature. The idea of writing a short paragraph about a band, and then expecting anyone to have any idea what they are about, is rather silly.

This is especially true for HEERNT.

New York based HEERNT was created in 2004 by drummer Mark Guiliana. Loosely described as âexperimental garage jazz,â HEERNT has managed to combine the finest aspects of jazz, rock, and electronic music and fuse them into a unique sound that explores the relationship between chaos and order.

One word, however, that seems to stick is energy.

Adding to this difficulty of "categorization" is the ever-expanding sonic palette presented at any given show. HEERNT can quickly shift from a standard saxophone/bass/drum trio, to a complex chorus of sounds which might include electric guitar, keyboards, trombone, or any number of musical or spoken samples. The mixed media presentation is rounded out by a television onstage projecting homemade images, designed to support the evolving arrangements.

Those witnessing a HEERNT show might be surprised by where the emphasis is placed in this band. Though the band is comprised of three technically accomplished musicians, the music is not "playercentric". Rather, the emphasis seems to be placed on the compositions coupled with an enthusiasm to experiment within the music. The balance between discipline and complete freedom creates an ever-changing landscape.

And while each show is as varied as it is quirky, these themes of experimentation, exploration, and joy are always present.
HEERNT is a party and you're invited.

Drummer/composer Mark Guiliana, a graduate of William Paterson University, has been around the world and in the studio with Avishai Cohen since 2001. In addition, Mark has enjoyed appearances at Carnegie Hall, the JVC Jazz Festival in Paris, Istanbul Jazz Festival, Ronnie Scott's in London, and has recorded and performed with Bobby McFerrin, Branford Marsalis, The Jazz Mandolin Project, James Williams, Jason Lindner, and many others.