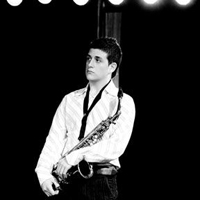 One of the most precocious talents in the history of jazz. When he was barely nine years old Francesco took his first steps, working with musicians such as Bob Mintzer, George Gruntz, Maria Schneider and Gianni Basso.

In 2001, in Urbisaglia, he won the Massimo Urbani National Award, displaying an incredible musical maturity, a crystalline technique and surprising improvisation abilities for such a youngster.Â

Meeting Wynton Marsalis in Pescara at the jazz Festival held on 8 July 2003 was a decisive moment for Francescoâs career. Â Amazed by Francescoâs qualities, Marsalis took him along with his septet on his European tour 2003, where Francesco performed in prestigious theatres in the largest cities in Europe.

During 2004 he received the International Jazz Festivals Organization Award (I.J.F.O.).

On the same occasion, he performed for Umbria Jazz at the Hilton Hotel, accompanied by an exceptional trio: James Williams, Ray Drummond and Ben Riley. He gave performances at the Lincoln Center with Wynton Marsalis and the Lincoln Center Orchestra in the Â âAlice Tully Hallâ and the âAvery Fisher Hallâ. He went to New York once more and performed at the Italian Cultural Institute, at the Lincoln Centre with the Lincoln Center Orchestra and in the BB King and Iridium jazz clubs accompanied by James Williams, Yoron Israel and Gregory Ryan. During the summer of 2004, Francesco performed in some of the greatest European Festivals with Joe Lovano, Hank Jones, George Mraz, the Manhattan Transfer, Wynton Marsalis and the Lincoln Center Orchestra, and the Count Basie Orchestra.
In order to experience new musical styles and genres, Francesco went to New Orleans where he played with Ellis Marsalis, Jason Marsalis, Thadeus Richard, Bob Franch, Maurice Brown and many other important local musicians while taking special lessons from Alvin Batiste.

In November 2004 he won the World Saxophone Competition during the London Jazz Festival.
In 2005, he was awarded the prestigious Django dâOr for best young musician.

During that year, he played for Umbria Jazz at the New Orleans Jazz Festival and the Melbourne Festival in Australia. He performed also in New York, at the Lincoln Centerâs Dizzyâs Club Coca Cola.
On the fiftieth anniversary of Charlie Parkerâs death, Umbria Jazz entrusted him with the task of playing the original scores of the famous recordings from âBirdâ with a Parker with Strings, supplied by Rutgers University. His performance was acclaimed by the public and critics alike. On this particular occasion, Francesco was accompanied by his usual Trio (Arrighini, Zunino, Bagnoli) and by the âSolisti di Perugiaâ. The homage to Charlie Parker continued in the festivals of Vitoria and Terrassa (in Spain) and Marsiac (in France) where Francesco played with the âCharlie Parker Legacy Bandâ consisting of Mulgrew Miller, Ronnie Matthews,Â Jimmy Cobb, Jessie Davis, Ray Drummond,Â  Vincent Harring and Wess Anderson.

Francesco is currently a student in Italian high school (Liceo Linguistico). Meanwhile, he is in the seventh year of his flute diploma at the Vincenzo Bellini Music Conservatory in Catania and studies piano jazz at the same time.