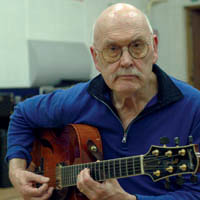 Whether playing originals or songs by others, Jim Hall is known for his subtlety and harmonic complexity. His influence in the jazz and jazz guitar pantheon is undeniable: including such important players as Pat Metheny, Bill Frisell and countless others.

Hallâs early years are punctuated with performances with legendary players and classic bands. After he attended the Cleveland Institute of Music, Hall studied classical guitar in Los Angeles with Vincente Gomez. He was an original member of the Chico Hamilton Quintet (1955-56), and was part of the hugely influential Jimmy Giuffre Three (1956-59). After touring with Ella Fitzgerald (1960-61) and sometimes doing duos with Lee Konitz, Hall was with Sonny Rollins' dynamic quartet in 1961-62, appearing on The Bridge and others. He and Art Farmer co-led a quartet (1962-64), and he occasionally recorded with Paul Desmond from 1959-65, and then became a New York studio musician and held down an active career as a bandleader, often playing in the trio format and sometimes joined by saxophonist Greg Osby.

This is the most recent duo effort from Hall, who recorded two with the legendary Bill Evans, one with George Shearing and, more recently, with Pat Metheny

"Jim Hall is the reigning master of the jazz guitar. This poetic player says more with fewer notes than any living improviser." â The New Yorker

Jim Hall's musical style has been in a state of continuous development throughout the course of his careerâa career that to date has spanned more than five decades. But just as with advances in technology, medicine, and other fields, Jim's evolutionary twists and turns in this last decade have been swift. With each new concert tour and recording (more than a dozen new CDs since 1991) Jim reveals yet another facet of himself.


Not only is Jim Hall one of the jazz world's favorite guitarists, but also in recent years he has earned critical acclaim for his skills as a composer and arranger. The first formal recognition came in 1997 when Jim won the New York Jazz Critics Circle Award for Best Jazz Composer/Arranger. His pieces for string, brass, and vocal ensembles can be heard on his "Textures" and "By Arrangement" recordings. His original composition, "Quartet Plus Four," a piece for jazz quartet augmented by the Zapolski string quartet, was debuted in Denmark during the concert and ceremony where he was awarded the coveted Jazzpar Prize, and later released on CD.

Just a few months prior to that, Jim got standing ovations at a concert in Pescara, Italy where he performed a complete program of his original compositions with a 12-piece string section from the Pescara Conservatory of Music.

His most recent large-scale composition was a concerto for guitar and orchestra, commissioned by Towson University in Maryland for The First World Guitar CongressÂ®, which was debuted in June 2004 with the Baltimore Symphony. The title of the work, âPeace Movement,â is indicative of Jimâs desire to contribute to world peace through his music. He views music as a way of bonding people together and crossing barriers, be they barriers of geography, ideology, religion, or other discriminations.

In accepting the NEA Jazz Masters Fellowship award in January 2004, he said, âThe women and men who have received this award in the past have spread peace and love throughout the world, something that governments might emulate. I am pleased to be one of the peacemakers.â

In addition to the recent focus on orchestral and choral composition, Jim remains active as a player, working and recording with a variety of ensembles. In addition to working with his trio, Jim likes to spice up the mix with various guests. From time to time you might hear Joe Lovano, Greg Osby, the New York Voices, Kenny Barron, Pat Metheny, Slide Hampton and others working for a night or two with Jim's groups. In fact, several of these guests can be heard on another live recording titled "Panorama.â On occasion, these alliances lead to more intensive collaborative projects such as the âJim Hall & Bassesâ recording, featuring Scott Colley, Charlie Haden, Dave Holland, George Mraz, and Christian McBride, and the "duets" project with Pat Metheny.

In a guitar-laden world, it is easy to see that Jim Hall is unique. Seemingly oblivious to the accolades, Jim is a modest and unassuming man (the English call him the Quiet American) who continues to hone his craft while striving to probe the boundaries of the musical universe. And he is more than happy to share his explorations and discoveries with others.

Jim has been called upon to conduct seminars all over the world. His intense desire to truly communicate makes one such experience stand out. In preparation for a four-day guitar seminar in Ravenna, Italy, Jim had his lecture outlines translated into Italian. Between the musical communication and the printed handouts, Jim was able to share his love with more than 100 guitarists from all over Europe.

Musicians as discriminating in taste and as different from one another in orientation as Hampton Hawes, Gunther Schuller, Ornette Coleman and Itzhak Perlman, have all applauded Jim's innovative approach and contributions to the world of jazz. Yet Jim is constantly refining and re-defining his craft. Perhaps that is why he continues to be a major inspiration to today's contemporary artists such as Bill Frisell, Pat Metheny, Chris Potter and Greg Osby.

Continuously pursuing new avenues of musical expression, Jim's career has been one of ongoing experimentation, particularly with instrumental combinations. Jim became keenly aware of the possible variations early on. In 1957 saxophonist Jimmy Giuffre invited Jim to become a member of his trio. Trombonist Bob Brookmeyer soon replaced the bassist in the trio. "Giuffre's ideaâat least after Brookmeyer joined usâwas to have three linear instruments improvise collectively" recalls Jim. "He believed it didn't make any difference whether or not the group had bass or drums. He said the instruments should be able to keep time themselves. It was damn hard, yet it was one of the most enlarging experiences I've had."
Jim has continued to experiment with unusual combinations of both instruments and musicians. In the early 1970s, Jim and Bob Brookmeyer reunited briefly performing in clubs as a duo. In 1984 Jim performed a symphonic piece, composed by Brookmeyer, featuring guitar with the Stockholm Radio Symphony. Also of interest were the two jazz-oriented albums featuring classical violin virtuoso Itzhak Perlman and concert pianist/conductor Andre Previn, with Jim on guitar, Red Mitchell on bass, and Shelly Manne on drums. "Power of Three" (the title referring to a trio of young pianist Michel Petrucciani, saxophonist Wayne Shorter and Jim), was recorded live at the Montreux Jazz Festival in 1987 and provided yet another instrumental mix with a more contemporary flair.
Critics and writers have noted correctly that Jim draws his inspiration from many sources, and indeed a lifetime of experiences. One such experience took place in the late 1950s while Jim was on tour in South America with Ella Fitzgerald. Engrossed with the "local" music, Jim stayed on when the tour ended, spending six weeks in Rio de Janeiro just as the Bossa Nova was coming into being. This exposure was to prove invaluable and become a part of Jim's musical versatility as evidenced later in his recordings with Sonny Rollins (What's New" - 1962) and Paul Desmond ("Take Ten" - 1963 and "Bossa Antiguaâ - 1963.)

Producer Herb Wong has drawn attention to Jim's "horn inspired solos." While this statement was made with reference to "The Jim Hall Quartet featuring Tom Harrell" (Denon, 1988), it is interesting to note that Jim looks upon his experience with Sonny Rollins back in 1961 as a turning point in his career. Of that year Jim recalls "He [Sonny Rollins] had a way of taking a tune apart and putting it back together again right in front of your eyes...his loose adventuresome way of playing influenced my playing."
Jim's musical style is recognizable not by a recurring signature riff or motif, but by his approach, his sound and his feeling. Jim's approach has been referred to as âcompositional," as he considers the melodic, harmonic and rhythmic elements of a tune in constructing his arrangements and solos.

"Clarity is the thing I'm after," explains Jim. "I want a picture in my mind of the way a solo looks as I'm playing it. That way I can keep it from becoming boringâto me or the listeners. I get bored very easily, and I think that's one thing that helps me avoid clichÃ©s."
When referring to Jim's sound, reviewers worldwide consistently use words such as "warm," "mellow," "gentle," "subtle," "rich tone," and "lightly amplified." Then there is the marriage between feeling and sound. "Few instrumentalists of any kind in any genreâjazz, rock or classicalâplay with such warmth and expressiveness...with the kind of genuine feeling that separates great music from the technically proficient yet cold-hearted brand" wrote one jazz critic.
Jim's approach to the interaction between players is also a much-discussed subject. The musician's who work with him talk of responsiveness, empathy, and communication. âI can feel what heâs going to play,â says bassist Steve LaSpina. When Jim speaks about the musicians he plays with, he talks about "enjoying each other's musical company." âHis concept of time is a model to emulate,â says drummer Joey Barron. "Jim plays but a few notes, leaving space for conversations with me." According to Jim, "listening is still the key."
Jim Hall was born in Buffalo and raised in New York and Ohio. Spending his early years first in New York, then in Columbus and ultimately in Cleveland, Jim was first introduced to music at home by his mother who played piano, his violin playing grandfather and his uncle who played the guitar. When Jim was 10 years old his mother gave him a guitar for Christmas and it was then that he began to seriously study the instrument. By the age of 13 Jim had become a professional musician playing locally in Cleveland with a group consisting of an accordion, clarinet, drums and, of course, guitar. The clarinet player turned Jim on to Benny Goodman's recording of "Solo Flight" which featured the guitar playing of Charlie Christian. "It was instant addiction,â recalls Jim.
It was later that Jim was introduced to the playing of Django Reinhardt. Jim continued to play in small combos throughout high school, and after graduation entered the Cleveland Institute of Music where he majored in music theory. Of that time Jim recalls "I played guitar on weekends but wasn't all that involved in jazz. I thought I was going into classical composing and teach on the side. Then halfway through my first semester towards my master's degree, I knew I had to try being a guitarist or else it would trouble me for the rest of my life."
Shortly thereafter, Jim left Ohio for Los Angeles. It was there, in 1955, as a member of the original Chico Hamilton Quintet with Buddy Collette on reeds, Freddie Katz on cello and Carson Smith on bass, that Jim began to attract national, and then international, attention.
By 1960 Jim had arrived in New York to work with Sonny Rollins and Art Farmer, among others. His live and recorded collaborations with Bill Evans, Paul Desmond, and Ron Carter, are legendary.
Some years ago, Guitar Player magazine quoted Jim as saying "I do feel good about my playing. The instrument keeps me humble. Sometimes I pick it up and it seems to say `No, you can't play today.' I keep at it anyway though." Jim and his wife, Jane, who is both a psychoanalyst and a songwriter, live in New York Cityâs Greenwich Village with their dog, Django.