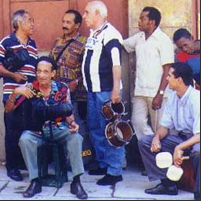 Here's a musical institution with few rivals. For 80 years Septeto Habanero (they were originally a sextet) have been playing the son of Cuba, keeping it alive, helping it grow, keeping it fresh. They handed down the sound to generation after generation, through social and economic hard times--the dictator Machado considered son subversive--and good times; the current regime encourages cultural development and made the band "professional musicians" with a state income and support.

Formed: 1920
The members of Septeto Habanero are part of a remarkable tradition, a cultural institution, the leading exponents of a style that is synonymous with Cuban music: the music rooted in Cuba's countryside, the son.

For most bands, ten or twenty years would be an impressive run. Eight decades are unprecedented. Septeto Habanero was formed in 1920 shortly after the arrival of the son in Havana from its birthplace in Oriente, eastern Cuba. The group and the music have thrived ever since. From the days of casinos and dictators, revolution, communism, and economic crises, son is Cuban music and Septeto Habanero is son.

Septeto Habanero was originally a sexteto when Guillermo Castillo, Felipe Nery Cabrera and Gerardo Martinez formed the group in 1920. "Our sound is essentially the same as it was back in the 1920s," says German Pedro Ibanez, Habanero's current leader (now aged 70). With a huge smile he adds, "Probably the biggest differrence is that when we began, we didn't have microphones." Back in the 1920s, the first incarnation of Habanero included the marimbula (similar to African mbiras: a small wooden box with strips of metal that are plucked). The double bass soon replaced the marimbula, but many of the elite and even middle class scorned the son considering it "too African."

The original Habanero didn't have a brass section either. In 1927, they were the first son sexteto to incorporate brass into their lineup with the arrival of trumpeter Enrique Hernâ¡ndez (becoming a septeto). Shortly afterwards, Hernâ¡ndez was replaced by legendary trumpetist Felix Chappotin, a man who would define the Cuban brass sound for generations. Today, it is impossible to imagine the son without the trademark trumpet. From its inception, Habanero was immensely popular. By 1925 the band was invited to New York to record for the prestigious Victor label, records that would become huge hits back in Cuba.

The first major crisis for Septeto Habanero was the regime of dictator Gerardo Machado. Machado considered the son subversive and began rounding up the soneros. "The authorities were ferocious," explained Ibanez. "Many ended up in prison." Habanero's immense popularity at the time was largely responsible for their escaping Machado's wrath--after all, it is nearly impossible politically, even for a dictator, to arrest one of the most popular bands in the country. Habanero's popularity also inspired countless Cuban groups: Sonora Matancera, Septeto Antonio Machin, Septeto Tipico, and even Ignacio Pinero's Septeto Nacional. In the following decades, the music of these groups would go on the shape the music of four continents. From Harlem's jazz to Kinshasa's rumba, the Cuban sound of the 20s has become an integral element in popular music throughout the 20th century.

Prior to the 1960 revolution, Cuba was part of "the circuit" for traveling musicians. Havana, like New York, Miami, or New Orleans was a key stop. Throughout the 20s, 30s, and 40s, Septeto Habanero continued traveling, performing and recording. They created a staggering total of more than 150 seventy-eight rpm records in those early years. The Great Depression hit Cuba as well. The economic crisis and food shortages led to more songs critical of the Machado regime, and more arrests. The 1930s also brought more Americans to Cuba, in search of alcohol during prohibition. Cuban rum and beer just offshore were quite attractive to "gringos opposed to the dry laws."

With the vocals of Gerardo Martinez and the trumpet virtuoso Felix Chappotin, Habanero released more and more hit records. In the 1940s and 50s, the band regularly performed live concerts direct from Havana's radio studios. In 1952, vocalist Manolo Fure joined the septeto. In 1958, while on his deathbed Martinez passed the Habanero leadership mantle on to Fure, who held the post until 1995 when guitarist/composer Pedrito Ibanez took over leadership from the then ailing Fure. Just three band leaders in eight decades!

The lively US-Cuban interchange ended abruptly four decades ago after Castro's revolution. Though just 90 miles south of Florida, the island seems half a world away with the isolation of the US embargo. Over the four decades of the Castro regime, Habanero's music remained constant, but their day-to-day lives saw dramatic changes. In the final days of the Battista regime, Ibanez remembers, "It was tough to earn a living just by playing music. We all had other jobs. We worked as masons, barbers, and making cigars." Following "la revolucion," Castro established a commission and sent experts throughout Cuba to find the nation's top musicians. Septeto Habanero, of course, was on the short list of Cuba's elite bands. These artists, became "professional musicians" under Castro's communism. With their basic living costs paid by the state, "it allowed us to completely devote ourselves to study and play music," adds Ibanez. "Before, it was really hard. I remember, we would play at clubs until 3 or 4 in the morning, and have to get up at seven to start shoveling or pouring concrete."

Septeto Habanero's offices are in the Epressa Ignacio Pinero. A center dedicated to one of Cuba's greatest soneros (and founder of the Septeto Nacional in 1927). From the street, the building looks like a typical old Cuban house that has been converted into apartments. Both inside and out, the paint is peeling and floors are sagging. Still, it functions. Inside, Sierra Maestra, Compay Segundo, Orquesta Sublime, and Septeto Nacional, all legends of Cuban traditional music, share office space. "Working with these greats," explains Ibanez, "is both a wonderful opportunity for the interchange of ideas and it helps, in a friendly competition raise each other's music to a new level." To say that Septeto Habanero is busy would be an understatement. Within Cuba, Habanero regularly perform 15-25 concerts a month. Few bands, anywhere in the world, even young musicians, let alone a bunch of guys that in most places would be retired, have as much work. They also continue a busy international touring schedule.

"We've played throughout the Americas, Europe, and Africa," explains Ibanez. "We've been to so many countries, Expo '98 in Portugal, plus France, Colombua, Venezuela, Burkina Faso, Gabon...dozens of countries. There are so many that I don't even know the names of some of these places."

In 1997, Septeto Habanero's work caught the ear of Lusafrica's Jose da Silva, the renowned Paris based Cape Verdean producer. In the 1990s, Da Silva brought Cesaria Evora to worldwide stardom with a series of now classic productions. In November 1997, da Silva brought Ibanez's Septeto Habanero into Havana's fabled EGREM studios. The result, "Orgullo de los Soneros." features the acoustic septeto's trademark sound reminiscent of the early part of the century recorded with a state of the art production. The repertoire includes nine compositions by Ibanez and lead singer Gonzalo Emilio Moret Lopez, plus four arrangements of some old Habanero classics. "Things have changed quite a bit over the course of the century," reflects Ibanez. "Take the second track, "Se Entero" for example. It is a Lucumi song (Lucumi is the Yoruba-African religion in Cuba). This type of African music was totally unacceptable by the government, high society, and even the middle class back in the 20s. Today our music is respected at the highest level." The Septeto Habanero's storied tradition rolls on. In 2001, they will tour North America, including performances at Toronto's Harborfront Centre. Habanero's tradition is indeed one of the proudest in music. And, if the past eight decades are any indication, it is a tradition that will surely continue for years to come.
Contributed by: Dan Rosenberg