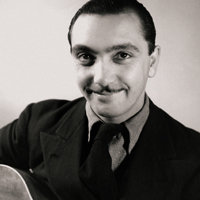 One measure of the importance of a music is its worldwide level of recognition. Jazz, as the indigenous American music reached this status quickly. Much of Jazzâs worldwide, and particularly European importance is due to jazz guitarist Jean Baptiste âDjangoâ Reinhardt. Django Reinhardt is still commonly referred to as the most influential European in Jazz ever. Reinhardt was born on January 23, 1910 in Liverchies, Belgium, and grew up with a camp of Gypsies near Paris.

Django first took up the violin, but at the age ten began playing the guitar. As he was playing on a borrowed guitar, a neighbor overheard him playing and gave him an old-fashioned banjo-guitar. From this point on, he was determined to become a musician. He had little interest in formal schooling; he only attended for one day. He began to play the Paris dance halls before he even turned 13 years old. In 1923, he won first prize in a contest conducted by dance hall musicians. In 1928, as Django was preparing for bed, the trailer in which he lived with his pregnant wife, Naguine, caught fire. In the fire, two of the fingers on his left hand were seared together. In the hospital, they managed to separate the two fingers, yet they were still permanently paralyzed. Despite all odds, he was able to play the guitar again, as he invented a new chord technique to allow him to play with only two fingers.

In 1930, Reinhardt had recovered from his fire injury and was just beginning to appreciate the music coming from America played by the likes of Louis Armstrong, Duke Ellington, Joe Venuti, and guitarist Eddie Lang. His friend, Emile Savitry, first introduced him to jazz and recounts that the first time Reinhardt heard the music, âhe took his head in his hands and began to sob.â His first group, which he formed with violinist Stephanie Grappelli, the Quintet of the Hot Club at France, achieved international acclaim less than a year after its formation. The group also included his brother Joseph Reinhardt and Roger Chaput playing rhythm guitar and Louis Vola on bass. The group recorded American standards such as âTiger Ragâ and âSt. Louis Bluesâ, as well as, Reinhardt/Grappelli originals such as âDjangology,â âBricktop,â and the international hit âNuages.â

Django was a free spirit in the truest sense of the phrase. He dressed like a Gypsy prince, and was not particularly reliable, as he oftentimes missed gigs to dine with his Gypsy âcousins.â Along with his two-fingered playing he was certainly a sight to behold. As the quintet gained fame, attempts were made to clean up Djangoâs unkempt look. After he gained a bit of notoriety, he began to have more appreciation for fine clothing, but did not lose his flamboyance. He refused to bring an instrument to a show, which was normally okay because one of his cousins would carry it for him, but was a problem when he traveled to other countries.

The group disbanded in 1939 when Grappelli went to England to escape World War II. Django traveled around Europe and Africa to avoid the Germans. Between 1939 and 1946 he was in a few big bands as well as forming a quintet with clarinetist Hubert Rostaing. In 1946 he arranged the soundtrack for the movie Le Village De La Colere. In 1946, he toured the United States with Duke Ellington to less than stellar reviews from the contemporary critics. Django left for the States without a guitar and fully expected to be presented a gold plated one upon his arrival and to be compensated for playing it. This plan, however, did not work out, and he was forced to borrow one. It was on this tour that Django first played with an electric guitar. Berney Kessel referred to Reinhardtâs brief stay in the United States, saying, âIf Django had wanted to stay in the United States and learn the language, I'm convinced he would have altered the course of contemporary jazz guitar playing -- perhaps even the course of the music itself.â

When he arrived in the U.S. he asked âwhereâs Dizzy?â hoping to meet Gillespie, as he had become a big fan of bebop. There was however not enough time, as Reinhardt had to hurry directly to Cleveland for his first date opening for Ellington. Reinhardt was disappointed to see that his name was not on the flyer promoting the concert. It is unknown whether the promoter had not heard of Django or just did not wish to advertise his appearance for fear that he might not show up. The tour ended with a two-night stand at Carnegie Hall, the second of which Django arrived to late without a guitar. Uneasy playing marred his entire stay in America, as he was never able to find a guitar with which he was comfortable. After the tour he played solo for two weeks in various cafes around New York, but soon tired of America and wished to return home. When he returned to Paris, he proclaimed Frank Sinatra as the best thing he heard in America.

By 1952, Reinhardt had begun to settle down with his wife, Naguine, their two sons and his elderly mother in a small house outside Paris in Samois. He continued to travel frequently to concerts. However, on the morning May 16, 1953, upon awakening Django called to his wife in pain saying he could not move. His wife called a doctor, but before the doctor arrived, Django felt better and got up and left the house to visit friends. As soon as he left the house, he collapsed. He was rushed to the hospital but never regained consciousness and died of a cerebral hemorrhage. Reinhardt is still remembered today as one of the all-time great guitarists in jazz music.

Two of a Kind