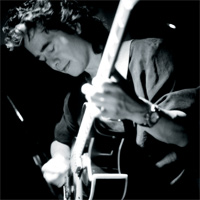 I was talking with an acquaintance in the record business the other day, and he jokingly said that because I hadn't been visible on the jazz scene for quite a while, some people might think I was in jail or something. We started laughing, but it made me realize just how long it's been. So since this is my first album to come out in the U. S. , I thought it would be a good idea to to re-introduce myself.

I was born soon after World War II and grew up in Tokyo. My father was a band leader and pianist, one of the first to start playing jazz in Japan, so I grew up surrounded by jazz music. It was a unique environment for a Japanese boy and I feel very fortunate to have experienced it.

I fell in love with the work of Wes Montgomery soon after picking up my first guitar. I started playing on my own and never had any formal training. While I was in college in 1968, I was asked to join alto saxophonist Sadao Watanabe's group. It was an unbelievable thing for me because Sadao was (and still is) an incomparable figure in Japan's jazz world. That was an exciting time in the music world when lots of different types of music were merging with jazz. Sadao played everything from rock to Brazilian to pop. From that point on I was thrown into a world of clubs, concerts, radio, and TV.

Sadao's group became enormously popular in Japan, making me the number one guitarist in the Swing Journal magazine reader's poll for the next few years. When the group went on its first tour outside Japan, playing at the Montreux and Newport jazz festivals in 1970, it was a turning point for me, and led to my coming to New York City after Sadao's band broke up.

In 1973 I got the biggest break of my life when I joined Sonny Rollins' band and played with him for the next three years. Playing with Sonny and Bob Cranshaw on bass was a dream come true, and each and every night was a priceless lesson. They introduced me to a world I never even knew existed, I was so lucky to have the chance to associate with such a jazz giant. This was definitely one of the high points of my career. I learned a lot about playing jazz and it has had a lasting influence on me.

At the end of the 70s, I formed my own electric fusion band which became quite popular in Japan. I explored the electric guitar during this period. The band made a mark over the next few years, with a successful series of six albums, and tours of both Japan and the U. S. , one of them with keyboard wizard Jan Hammer as special guest.

After another three years with Sonny's group in the mid 80s, I had the opportunity to acquire my own recording studio in Soho in NYC, and started to get involved in recording and production. I formed the JazzCity label for a Japanese record company and started to produce a series of CDs of up and coming NYC based jazz musicians. It was never my intention to be a producer, but this became my main work for the next 10 years and my career as a musician was put on hold.

Producing was a learning experience for me. Aside from the technical aspects of production, it also helped me understand how things work outside the musical world of my own head. But the further I got into production, the more I realized that I really missed being a musician and creating my own music. I wasn't happy.

These past few years I've been trying to get back to playing, but it was difficult getting off the ground. I felt like I was starting from square one. Fortunately, in the middle of this struggle the JazzCity series came to an end and I was able to put all my efforts into my own career again.

I began to feel inspired to do an album, a simple jazz album using an organ trio. I wanted to prove to myself that I was really a jazz musician - something I felt I hadn't proven yet. I'm interested in many kinds of music, not just jazz; but in the end, being a jazz musician is what defines me and what I am most proud of.

One of the reasons I wanted to do an album with an organ trio was because I wanted to play with Larry Goldings. When I was still producing, he turned up as one of the sidemen on a recording I was doing. I'd known him before, but at that time I heard and saw a side of him I hadn't noticed earlier. Although a young man, his depth and warm, spirited musical quality delighted me. At that time I decided that if I did use organ, I would ask Larry to play.

Actually, I have very special memories of the Hammond organ. When I was a child, we had a Hammond along with the piano in our living room. When I first heard that organ, I was awed by its impressive sound. I would hear my father playing it when he held his band's rehearsals at our house and I can remember the sounds of Jimmy Smith's Blue Note records wafting from the house as I played out in the yard. For me, the sound of the organ is like home cooking.

Another high point of my career as a musician was in 1976 and 1977, when I played with organist Larry Young and Joe Chambers, a great drummer. I used to listen to Grant Green's albums with Larry Young on organ when I was in Japan, so when I got the chance to play with him I was ecstatic. In that way, I've had a connection with the organ for many years and I always had the dream of making an organ trio album.

For me or any other jazz guitarist, to attempt to do an organ trio album is quite a challenge because we can't avoid comparing ourselves to musicians like Wes Montgomery, Grant Green, George Benson, and John McLauglin who have already done organ trio albums so well. Their albums are classics and if you're not careful, you can easily end up with something that sounds like one of them. So it was important for me to create an organ trio sound of my own.

For the drummer on this album I had Elvin Jones in mind. The first recording I did after coming to New York was with Elvin's band, and I also did a tour of Europe with his band in the 70s, an unforgettable experience. His drumming has always amazed me. But he was unable to do this album, so I looked for someone whose playing was wild, but tasty and sensitive like Elvin's; Lenny White popped into my head.

I knew Lenny when I first came to live in New York City in 1971 and, although I hadn't seen him in a long time, I gave him a call. Lenny is probably known these days primarily as a fusion drummer, but the Lenny I had in mind, was the "pre Chick Corea/Return to Forever" Lenny. I had a feeling he would be right for this album. When I talked to him over the phone, he said he'd heard some of Larry's playing and liked the idea of the organ trio, so he was in.

So I wrote a lot of tunes with an organ trio in mind. Although it wasn't a conscious choice, now, as I listen to each tune, I can point out the influences that inspired them: John Coltrane, Clifford Brown, Miles Davis, Milt Jackson, Horace Silver, Thelonious Monk, and of course, Sonny.

Lenny was pretty busy and the three of us couldn't rehearse together before the recording, so Larry and I got together and went over the tunes. I made simple head arrangements for the recording, setting only the important points, and left the rest open. I felt comfortable as soon as we started playing, and probably because we were all playing together for the first time, everything felt fresh and exciting. As I had expected, Lenny is indeed a great jazz drummer.

After the recording, I let some time go by before I listened to the tape and chose the tunes that I liked. Some of the tunes felt incomplete with only the trio, so for those I experimented with things like percussion, synthesizers, and flute and horn arrangements.

When the time came to mix the album, it had already been a year since we'd recorded it. I'd spent so much time with it at this point, that I felt I didn't want to leave this next step to anyone else, so even though it was torture, I mixed the whole thing myself.

When I finished it I asked myself, "Are you happy now? " and although by this time I was tired of the whole thing, I thought about it for a while and answered, "Yes. . . I think I'm happy now".

So here it is. I hope you enjoy it. 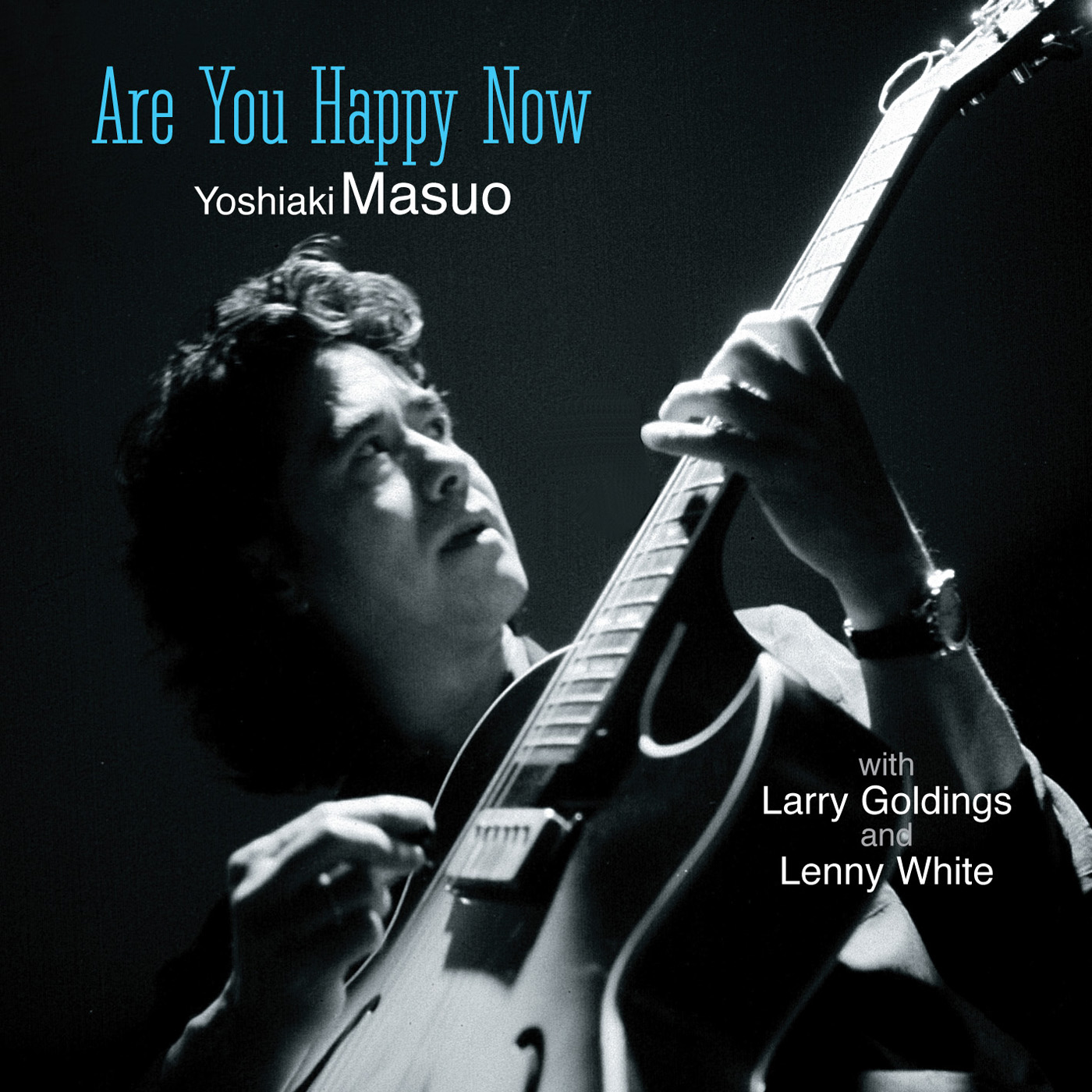 Are You Happy Now